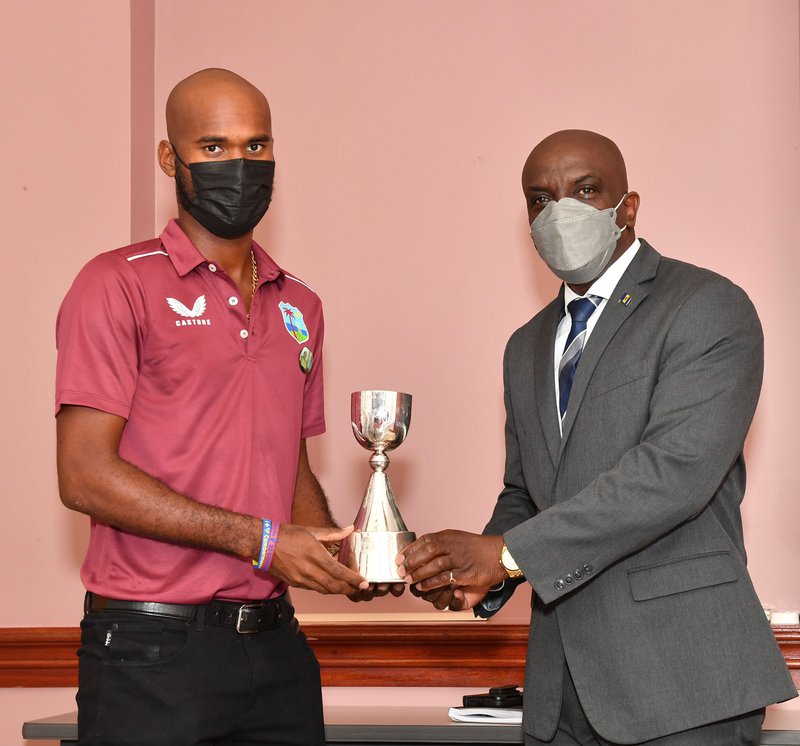 Fresh from the Herculean feats in the recent Apex Test Series to help West Indies beat England and secure the Richards-Botham trophy, Kraigg Brathwaite has turned his attention to a fresh assignment. The captain on Tuesday pledged his support for age-group cricket and says he is willing to be an ambassador for boys and girls across the region, and inspire then as they aspire to be top-flight cricketers.

He spoke of his new endeavor during a courtesy call with Charles Griffith, the Minister of Sports in Barbados. Brathwaite shared the trophy with Griffith and local sporting administrators and also present a bat signed by Sir Vivian Richards and Lord Ian Botham.

“It was a tremendous victory over England, and it is still fresh … we have a lot to celebrate as West Indians. It was a hard-fought series, and we played some great cricket to win the Richards Botham trophy for the first time. I wanted to share it with our supporters so everyone can feel part of our success, and what we achieved for our fans,” Brathwaite said. “I also want to offer my support to young cricketers in Barbados and all across the West Indies. Especially, at primary school and Under 13 levels, where it’s all about enjoyment and learning the game. I remember my days as a youngster coming up and I remember all the help and encouragement I received. I want to also inspire a young generation of cricketers and help to play my part as an ambassador for West Indies cricket.”

Brathwaite was the mainstay of West Indies batting in the three-match Apex Test. He topped the batting charts with 341 runs at an impressive average of 81 runs per innings. This included a monumental top score of 160 – his first Test century on home soil at Kensington Oval and 10th overall. Throughout the match he defied the England bowlers for just under 16 hours and faced 673 balls – an amazing record for the longest batting period in West Indies Test history. The next match West Indies won by 10 wickets to secure the historic 1-0 series triumph.