At Queen’s Park Oval: A classy maiden List A century from Kavem Hodge (123) was overshadowed by a century from Chanderpaul Hemraj (100), as the Guyana Jaguars toppled the Windwards Islands Volcanoes by 22 runs.

“This was a huge win for us. It was a must win game if we wanted to compete with the other teams and get a final two (position) in Zone B”, said Jaguars coach Esuan Crandon to CWI Media.

The bedrock of Guyana’s innings was built on two factors: their record 171 run opening partnership between player of the match Hemraj and Tagenarine Chanderpaul (64), then solid middle order contributions from Raymond Reifer (52) and Christopher Barnwell (38). 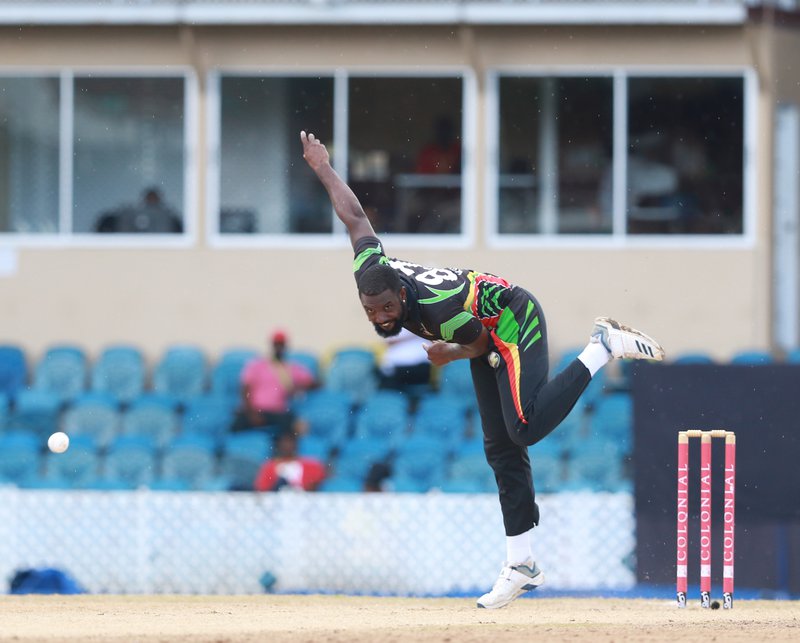 “We batted well in the first half, even though I felt we fell short by about 15-20 runs. Having said that, Hemraj batted beautifully and it showed what can be accomplished when you set a solid foundation, and the others guys (batsmen)afterwards were able to come in and play a little bit free”, said Crandon.

Playing in his 39th List A game, Hodge who had taken over from original team Captain Kirk Edwards, shared in a record Windward partnership for any wicket, of 156 with Alik Athanze (63).

For the second game in a row following their agonizing two run loss to Trinidad & Tobago Red Force on November 17th, the Windwards seemed to be in a position to win before falling short in the end.

“We knew it would be difficult (for Windwards) to keep scoring at six runs per over, but I thought they batted well, especially Kavem Hodge. Unfortunately he couldn’t bring it home for them.

“They gave us a good fight, but I must give credit to my bowlers. We bowled well, but there is room for improvement because the team has spoken about improving our death bowling and I’m pleased we were able to keep the Windwards to under seven runs per over.”

At Brian Lara Academy: A disciplined team batting and bowling performance from the United States of America (USA) guided them to a 43 run win over West Indies Emerging Players, halting the young Windies side winning streak in the process.

“It’s good to be on top of the group, but this defeat (against USA) shows we can’t take anything for granted”, said West Indies Emerging players captain Yannic Cariah to CWI Media.

Trinidad & Tobago national Cariah, took 2 for 35 in his 10 over leg-spin spell, did his part in a solid team bowling effort to restrict the Americans to 216 for 9.

The chase never got going for the Windies as they stumbled for 59 for five in the 16th over, when Cariah (7) was dismissed, despite fighting late order efforts from Guyanese Kevin Sinclair (44) and Dominic Drakes (28) from Barbados.

“We have been batting well throughout the tournament, but no one took responsibility this time and that set us back a bit. But it’s a learning curve and we will bounce back in the next game”, said Cariah.

“The aim now is to take it one game at a time in our final two games and finish on top of the group.”