PROVIDENCE, Guyana – Trinidad and Tobago opened their CG United Women’s Super50 Cup points tally with a comfortable win over the Leeward Islands, om Friday. Electing to bat first, the Leewards posted 132-8 from their 50 overs, led by a valiant 46 from skipper Shawnisha Hector. She topscored with 46 off 60 balls which included seven fours. Hector shared a 52-run partnership with Arsheena Freeman, who despite making just three runs off 64 balls, was able to help her captain stabilize the innings.

To the back end of the Leewards Innings, Terez Parker and Amanda Edwards put on 20 together then Edwards continued with Rozel Liburd to see their team safely navigate the remaining overs. Edwards and Liburd frustrated the T&T bowlers as they took quick singles and the odd boundary, they added 45 runs together before Edwards was dismissed on the last ball of the innings for 29 (41 balls, 4x4) while the liverwire Liburd remained not out on 31 off 39 balls with three boundaries. Experienced allrounder Kirbyina Alexander with 10-2-20-3 was T&T’s most successful bowler.

Reniece Boyce and young Djenaba Joseph opened the batting for T&T and easily went about chasing their 133-run target. With 71 runs on the board, Boyce was dismissed for 35 (56 balls, 4x4), trapped LBW to Amanda Edwards. Hector returned to feature with the ball, as she bowled Joseph for 15. It was the third-wicket partnership of 56 runs between captain Anisa Mohammed with 20 not out and Shenelle Lord 30 not out with five elegant boundaries, 5x4) not out that saw T&T home to victory with 15 overs to spare. 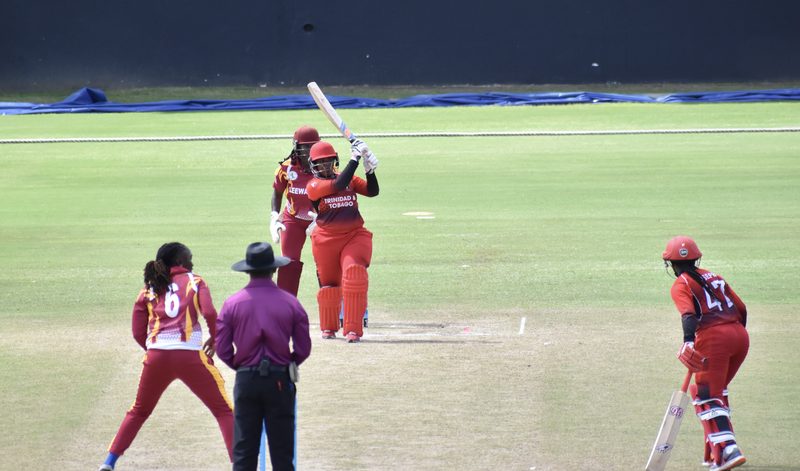