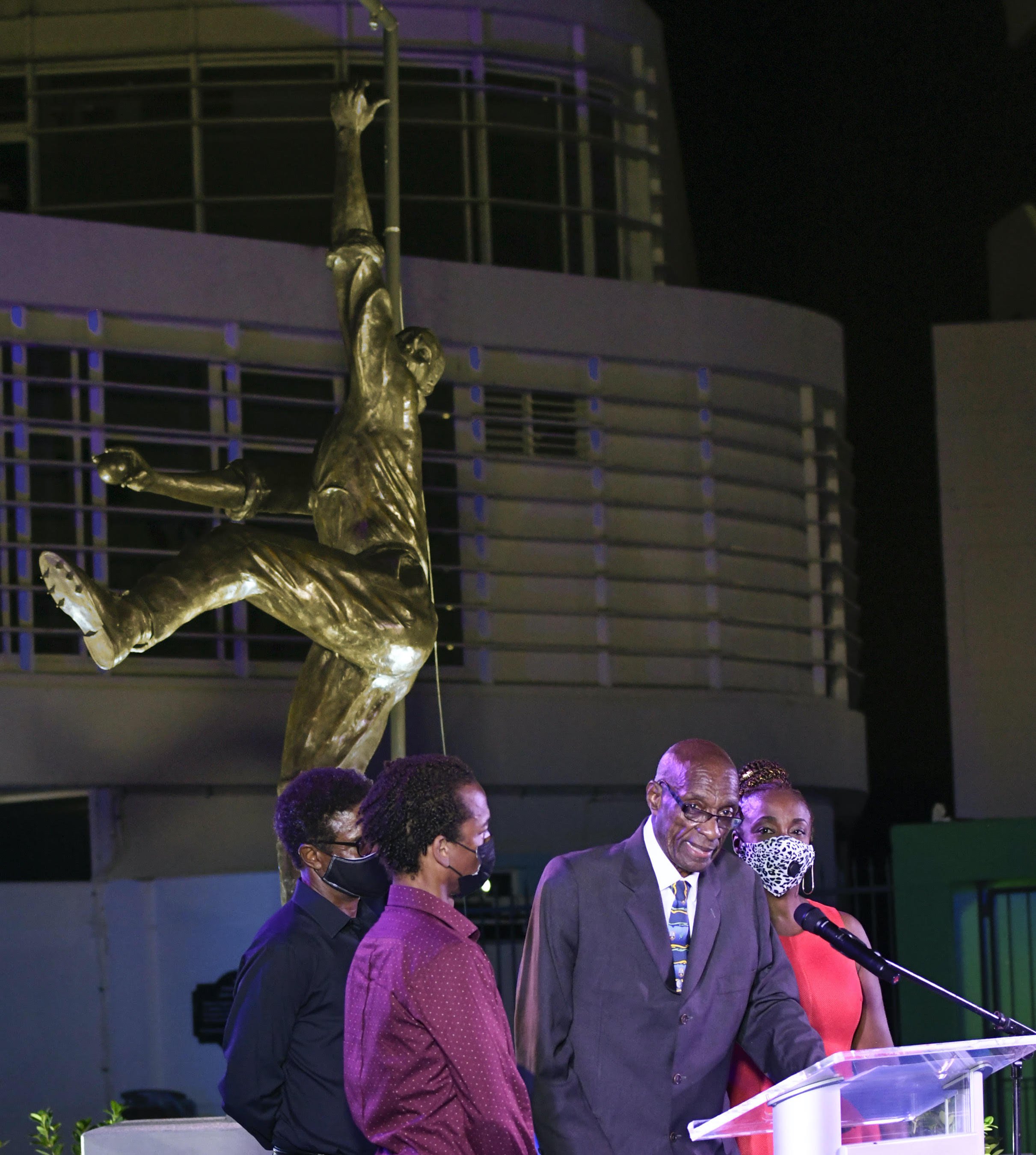 West Indies cricket icon Sir Wes Hall was honoured on Sunday night when a special statue was unveiled at Kensington Oval in Barbados. Following a ceremony attended by cricket officials and greats of game Sir Garfield Sobers, Sir Charles Griffith, Joel Garner and Desmond Haynes, the 12-foot-tall statue was revealed. It is a tribute to the outstanding, lifelong contribution Sir Wes made to the game of cricket and to public life on the island.

It showcases the fast bowler at the pivotal point of his bowling action as he is about to hurl down a delivery. It stands next to the statue of Sir Garfield — in a prominent position at the entrance to the historic venue.

Sir Wes was accompanied by his daughter Dr Kerry Hall and his sons Sean Hall and Remy Hall, as well as the country’s Prime Minister Mia Mottley, Sir Garfield, Sir Charles, and Haynes. He was applauded during the unveiling and there were also special video tributes from other icons Sir Clive Lloyd and Michael Holding.

Sir Wes gave a moving speech punctuated with humor and anecdotes. He thanked the cricketing world for "showing me such love as I did what he loved". He described himself as a servant of the people and said his life and careers can be likened to the four seasons — spring, summer, autumn and winter. “It was a great privilege to play cricket for the West Indies. I was very proud to be a member of the team in the halcyon days which became the embodiment of world cricket supremacy. It was also an honour to manage the team of great men and ambassadors and we became the greatest team the world has ever seen. We learned to dream big and to achieve greatness,” he said. “From very young my dream and ambition was to play for the West Indies. I want to thank everyone around the world who showed me such lover and respect and who shared in my dream and my journey. It was for the people I did it all. When ordinary people do extra-ordinary things that are worthy of emulation and received by people of their country it will be material for young men and women to know that they too can write their names in history’s pages.”

Sir Wes, aged 83, is one of the greatest bowlers in the history . He made his international debut for West Indies against India in the Test at the Brabourne Stadium in Bombay which was played from November 28 to December 3, 1958 — so this special event is 62 years to the date of his first international appearance.

He played 54 Test matches and took 192 wickets, at any average of 26.38 per wicket. He bowled the famous last over in the historic tied Test against Australia at the Gabba 60 years ago.

Following his retirement he held several key positions including President of West Indies Cricket Board, Director of International Cricket Council (ICC), as well as Team Manager and Chairman of Selectors of the West Indies cricket team. He was also a Government Minister in Barbados and ordained minister of the church. He was knighted in 2012 and inducted into the ICC Hall of Fame in 2015.