Pollard punches hard but WI go down at Wankhede

Skipper Kieron Pollard showed his power and strength with a boundary-studded half-century but West Indies surrendered to India in the third and final T20 International against India by 67 runs on Wednesday night. 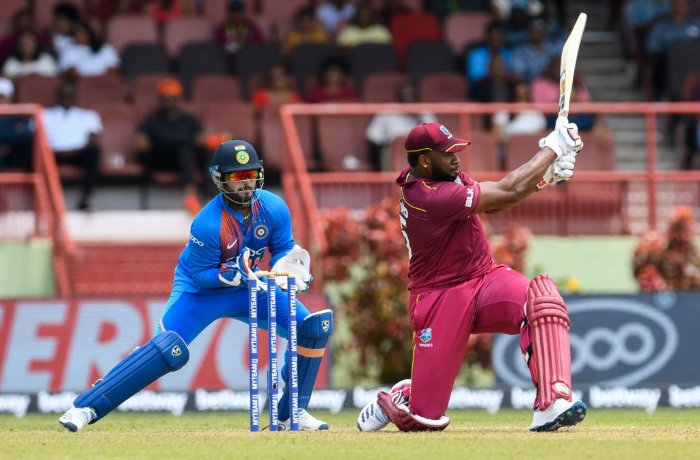 Known worldwide for his ability to clear the boundaries, the imposing Pollard smashed six towering sixes and five fours in a commanding knock of 68 off just 39 balls at the Wankhede Stadium on Wednesday night. Pollard’s fearless fight was not enough as West Indies closed om 178-8 off their overs, in reply to the home side’s imposing 240-3 off their 20 overs on a good surface.

He shared a vital fourth-wicket stand with Shimron Hetmyer which took the score from 17-3 to 91-4 before the left-hander was caught at long-on attempting a third consecutive six off chinaman specialist Kuldeep Yadav. Hetmyer made 41 off 24 balls with five towering sixes – as he followed up previous scores of 56 and 23.

It was Pollard’s fourth half-century and in the process he became the fourth West Indian batsman to surpass 1,000 career runs in this format. The others to achieve this feat are: Chris Gayle (1677), Marlon Samuels (1611) and Dwayne Bravo (1142).

West Indies were handicapped with the loss of opener Evin Lewis, who suffered an injury to his right knee while in the field and was unable to bat. He had scans at a local medical facility which revealed soft tissue damage. The result meant India won the three-match series 2-1.

Pollard said despite going down the series he was heartened by the progress being made by his players.

“We could sit here and lament that we lost the series, but I have seen some really good signs… progress being made by players and as a team. I’m sure at the start many felt it could be a walk over for India, but we played well, we pushed them to the limit in the first match and we won quite well in the second match,” Pollard told reporters at the end of the match

“In our minds 240 was gettable... 230 has been chased here when England played South Africa and I remember we chased down over 230 in South Africa back in 2015. We have of lot of emerging players coming through. Yes, we lost 2-1, but we have three more games to look forward to in the ODIs.”

In the first half of the match, India’s captain Virat Kohli made an unbeaten 70 off just 29 balls while openers K.L. Rahul (91) and Rohit Sharma (71) match each other in their dynamic stroke play as they put on a 135 in just 12 overs.

The two teams will now travel to Chennai for the first match One-Day International on Sunday at the M.A. Chidambaram Stadium.