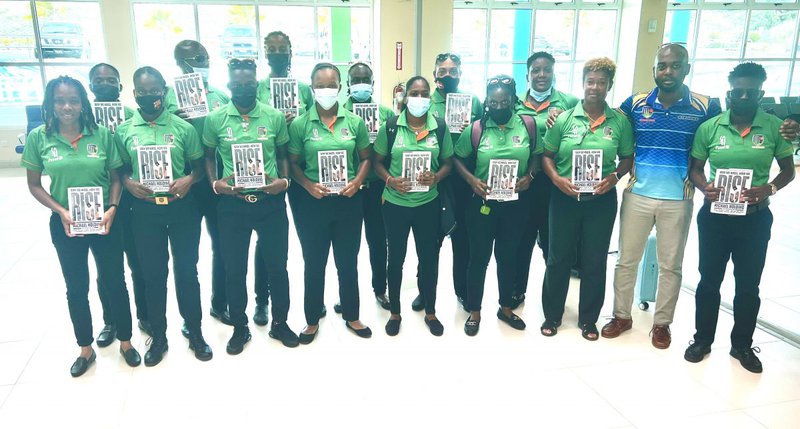 Kingstown, St. Vincent – Dr. Kishore Shallow has donated 100 books to Windward Islands Cricket Board (WICB) to disseminate to cricketers. The book “Why We Kneel, How We Rise” was written by West Indian cricket legend Michael Holding.

The books will be provided to each player of every cricket team that represents the Windward Islands over the next year. This includes Senior Women and Men, Under 19 Boys and Girls, Under 17 boys, and Under 15 boys.

The first team to receive the books was Windward Islands Women. The traveling squad were gifted the books before departure at the Argyle International Airport on June 5, 2022. The team will be participating in the West Indies regional 50 overs and 20 overs tournaments.

Dr. Shallow, Cricket West Indies Vice President, and WICB President, said that this is part of his commitment to continue championing players’ development through education.

“I have always advocated balancing education and sports. This is just another manifestation of my commitment to championing this philosophy. Affording cricketers in the Windwards the opportunity to learn more about our history, especially through the lens of a West Indian icon, Michael Holding, is personally gratifying. Dr. Shallow added: “This book has summarized our history in true Michael Holding style. It is fantastically written, and perfectly encapsulates black history in particular. Every single West Indian should educate themselves through this amazing book.”

“This is a thoughtful gesture from Dr. Shallow. The book is quite enlightening, and I have no reservation that it will positively impact the minds of the players and management staff who prioritize the time to read the book.”

The book was originally published in June, 2021, following an emotional interview with BBC, when Michael Holding broke down in tears while sharing his experience with racism.

The book is available on Amazon.

A legendary West Indian cricketer with 249 wickets in 60 tests and 142 wickets in 102 ODIs. World Cup champion in 1979. Since playing, he has become a prominent cricket commentator with over three decades of television commentary.