Matthews ends year on a high with ICC award 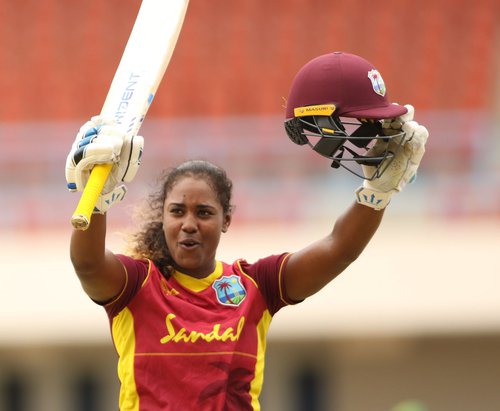 Hayley Matthews had a stellar year for West Indies Women as she featured in the Top 10 among bowlers and batters in One-Day Internationals. She took 18 wickets at an average of 22.44 runs per wicket with best bowling of 4-26 in Karachi as international cricket returned to Pakistan in November. She also made 380 runs, which included one century – 100 not out against Pakistan in Antigua in July.

The allrounder topped off the excellent campaign as she received the ICC’s Women’s Player-of-the-Month award for November. In four ODIs in November – three in the bilateral series against Pakistan and one in the ICC Women’s World Cup Qualifier against Ireland – Matthews scored 141 runs and claimed nine wickets, including an excellent four-wicket haul against Pakistan in Karachi.

She emerged as Player-of-the-Series against Pakistan, hitting 57 and taking three wickets in the first ODI at the National Stadium, before following up with 26 and the four-for in the second game. In the final contest, she made 49 as West Indies Women wrapped up a crucial clean sweep. This is the second time Matthews has been nominated for the award – she was last in contention for the award in July, when West Indies captain Stafanie Taylor won the prize.

“It’s exciting to be nominated twice for the year and to be able to come this time and win it now. This is my first time winning this award and what is also rewarding is that I worked so hard throughout the year. As a team we put in some really good performances and reaped rewards,”

“I definitely set goals at the beginning of the year. I think ‘bowling-wise’ I probably exceeded the goals. I know I wanted to perform well with the ball and the wickets I was able to tally up and the economy rate these are what I feel very pleased about. I did what the team required.”

She added: “I did have goals with the bat, probably to score one or two more hundreds and reach a bit more milestones throughout the year, but nevertheless I think my biggest goal this year really about was my consistency, and I was happy to get some good scores and help the team win matches.”

Matthews is one of the leading allrounders in West Indies Women’s history. In ODIs she has played 57 matches and scored 1426 runs and captured 63 wickets. In T20Is she has so far made 61 appearances with 1055 runs and 58 wickets. She will now focus he attention on the team’s preparations for the ICC Women’s World Cup in New Zealand, which will be played from Match 4 to April 3, West Indies Women to start World Cup against hosts New Zealand | Windies Cricket news .