The West Indies Women embodied the words of their cricketing anthem, when they “Rallied” as a team to win the CG Insurance 2nd T20 International by 7 runs via the Duckworth/Lewis/Stern method, after the match was called off at the end of the eighteenth over at the Coolidge Cricket Ground in Antigua.

Openers Deandra Dottin and Hayley Matthews looked set to continue their opening partnership run-fest from the first match, as Dottin got into the action early with a six to cow-corner. But with the score on 34 and looking for another big heave, Dottin was bowled by Fatima Sana, for 17 off 12 deliveries which included two fours and the six. Matthews departed two runs later, caught for 9 off 16. 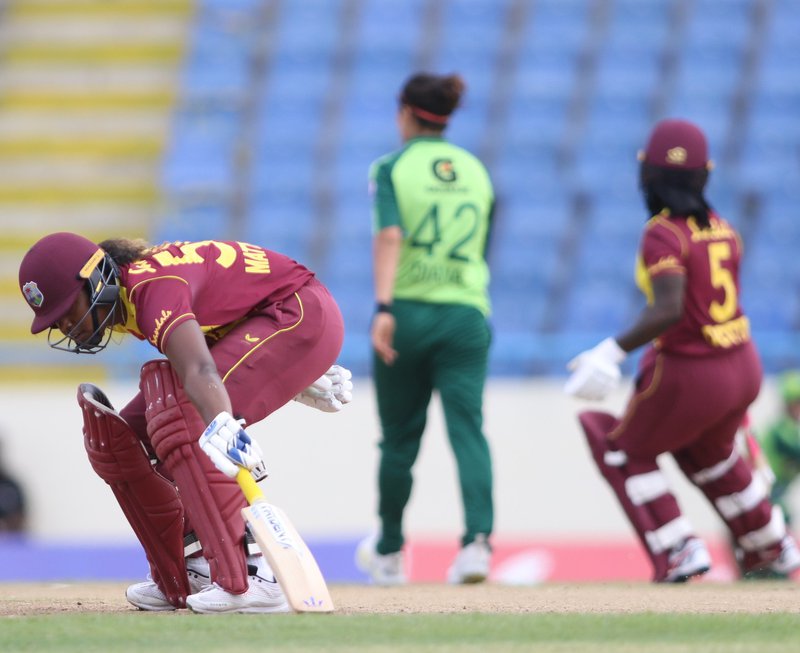 Skipper Stafanie Taylor and Kyshona Knight looked set to steady the innings, with Kyshona the aggressor of the pair. Taylor was trapped LBW for 5 and in came Chedean Nation. Kyshona and Nation rotated the strike to get the quick singles on the scoresheet. But Kyshona was caught for 15 off 24, which included two boundaries.

In came the other half of the Knight twins, Kycia. Together with Nation, the pair added 32 runs for the fifth wicket. Trading blows for blows, Nation and Kycia struck two fours and a six each before Nation fell for a well- played 28 from 33 deliveries. Kycia finished not out on 30 from 20 deliveries.

The Pakistan innings never looked composed as they lost captain Javeria Khan in the opening, when she was runout three balls into the first over. It was a regular progression of wickets for the visiting team, as running between the wickets proved to be their downfall. Of the six wickets that fell for Pakistan, five of them were via the runout route.

The experienced Nida Dar looked set to get her team the series-equalizing victory as she took the charge to the West Indies bowlers, smashing four-fours on the way to a top-score of 29. Aliya Riaz and Fatima Sana remained not out for Pakistan on 17 and 8 respectively, before the downpour came.

Match officials and captains met and it was determined that it was not possible to return to play. After calculations were done, the West Indies won by 7 runs via the DLS method.

This victory sealed the CG Insurance T20 International series win for the West Indies Women, their first series win since May 2019 against Ireland in Ireland. It is also the first series win under new Head Coach, Courtney Walsh.

Speaking after the match, Walsh said he was pleased with the win,

“Feels very good, the girls have done us proud, they played some good consistent cricket throughout the series and they deserved to win the series. But still a fair amount of work to be done…. They deserve the series win and I’m hoping it doesn’t stop here.”

Kycia Knight for her unbeaten 30 not out was the CG Insurance Player of the Match. 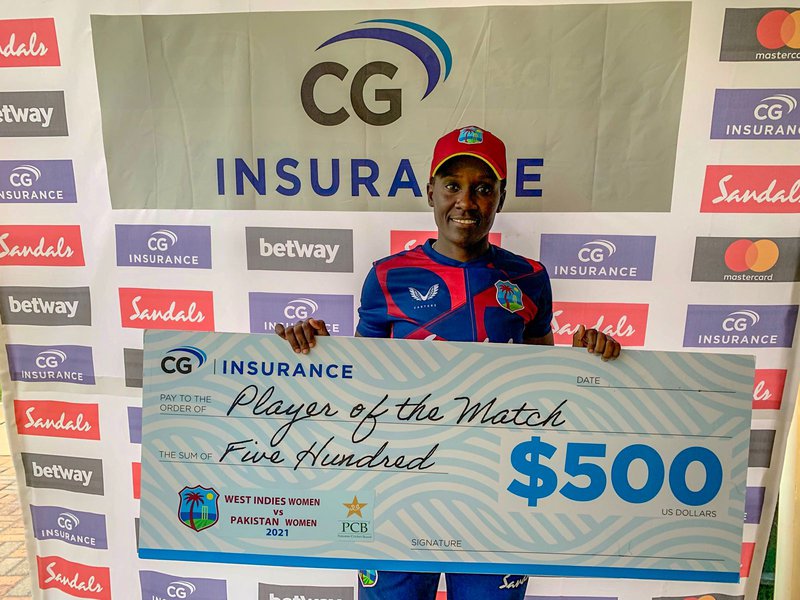 Earlier in the day the West Indies Women A Team put up a solid charge but went down to Pakistan Women by 14 runs in the second T20 match of their series, also played at the Coolidge Cricket Ground.

West Indies A-Team won the toss and sent Pakistan A into bat first. They scored 108/5 from their 20 overs. Wicketkeeper Muneeba Ali top-scored for Pakistan A, with 27 off 16 deliveries while Kaynat Hafeez and Rameen Shamim had scores of 24 and 21 not out respectively.

West Indies Women A-Team, put up a valiant fight until the end, but they were bowled out for 94 from 19.4 overs. Once again, Rashada Williams top-scored for them, scoring 21 from 38 deliveries, followed by captain Reniece Boyce with 17.

Kainat Imtiaz was the best bowler for Pakistan Women A-Team, finishing with 3/18 from three overs.