England will arrive in the Caribbean to play the first ever five-match T20I Series between the two teams. All five matches in Barbados will be played across a nine-day period from January 22 to 30, 2022, including two consecutive weekends of back-to-back T20I cricket. 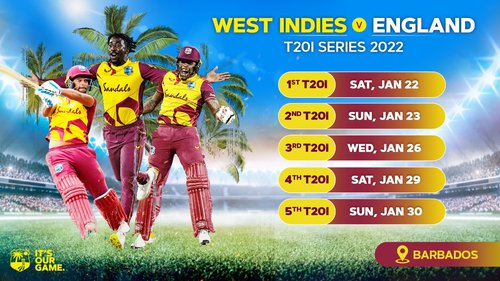 Following West Indies’ white-ball tour of India in February 2022, the West Indies will welcome England back to the Caribbean for a three-match Test Series to compete for the newly created Richards-Botham Trophy. This new trophy honours two legends of cricket, Sir Vivian Richards and Lord Ian Botham, whose friendship and on-field heroics became synonymous with some of their respective teams greatest Test match moments. 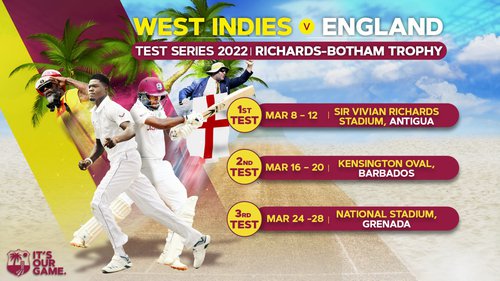 The much-anticipated Test Series will start appropriately at the Sir Vivian Richards Stadium (SVRS) in Antigua on March 8, 2022 before moving to the Kensington Oval in Barbados for the 2nd Test starting on March 16. The 3rd Test match will bowl off on March 24 on the “Spice Isle” of Grenada at the National Cricket Stadium. The Test Series is a key fixture in both teams’ International Cricket Council (ICC) World Test Championship schedule which will determine the best Test match cricket team in the world by 2023.

Initially, Official West Indies Tour Operator and Licensed Ticket Partner packages will go on sale, with details to come in the next seven days. Online ticket sales will commence in mid November through CWI’s new ticket platform. Fans can sign up for receive the first news of tickets going sale at https://www.windiescricket.com/updates.

“We are delighted to be able to confirm the venues for this extended West Indies vs England T20I and Test Series. The history and rivalry between the two teams creates great anticipation for fans here in the Caribbean and around the world. These fixtures are part of a bumper year of international home cricket running from January to August in the Caribbean.” Grave added: “A West Indies vs England home Test Series is the biggest sporting and sports tourism event in the Caribbean. Dating back to 1930 when the first England team visited, these fixtures are steeped in history and a new chapter in this great rivalry will be written, this time with the prize of the new Richards/Botham Trophy. Celebrating these two heroes of cricket and lifelong friends with the new trophy, staging world class cricket and hosting thousands of England fans will be a welcome boost for cricket and for the whole region. We are all really looking forward to welcoming fully vaccinated England fans who can not only enjoy some winter sun and Caribbean hospitality but also some world class cricket with both these England Tours, as well as the ICC U19 Cricket World Cup that will also take place in the West Indies in January next year.”

The West Indies vs England T20I and Test Series will be broadcast exclusively live on BT Sport in the UK, as well as with CWI’s exclusive broadcast partners in key territories around the world.