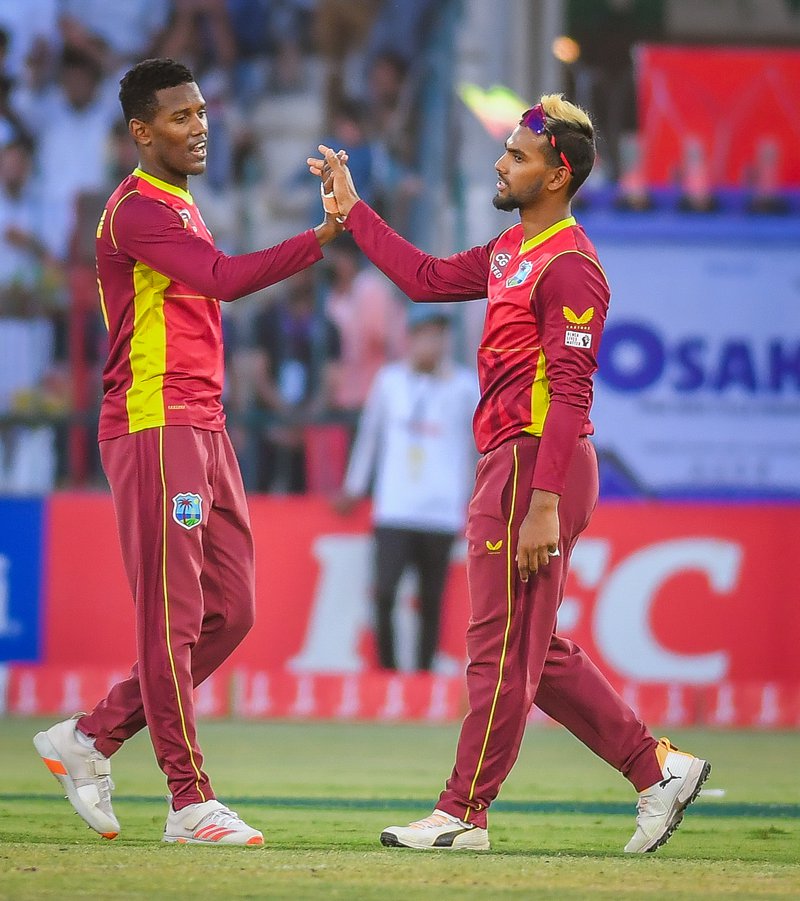 Another very good spin bowling performance by Akeal Hosein was not enough for West Indies as they fell to a defeat against Pakistan in the second match of the three-game series, on Friday. Left-armer Hosein ended with 3-52– including the prized wicket of Babar Azam – while Alzarri Joseph produced an outstanding ten-over spell of 2-33 and fellow pacer Anderson Phillip, 2-50, as the West Indies limited the hosts for 275-8 off 50 overs.

Fakhar Zaman fell for 17 in the seventh over after top-edging Phillip to short third man but Babar (77) And Imam-ul-Haq (72) combined in a 120-run, second wicket stand to lift the innings. Babar, coming off hundreds in his last three innings, hit five fours and a six while Imam-ul-Haq struck half-dozen fours. When Imam was run out in the 28th over, Babar put on a further 42 for the third wicket with Mohammad Rizwan (15) before the innings collapsed.

Hosein, the leading wicket-taker in the world this year, triggered the slide when he pouched a return catch off Babar’s leading edge in the 36th over and Pakistan lost five wickets for 43 runs. Joseph struck two key blows and dried up the scoring.Shadab Khan and Khushdil Shah both struck 22 down the order to rally the innings late on.

The West Indies had an exceptional batting powerplay, although they lost last match’s century-maker, Shai Hope, on the final ball of the first over.  With the score at four, Shamarh Brooks came to the crease and played his part in an impressive powerplay along with Kyle Mayers.

They put on 71 in the first 10 overs, before Mayers was dismissed for 33 (25 balls) on the final ball of that period.  Brooks went on to score a polished 42 (56 balls), which ended up being the top score for the West Indies.  However, outside of Nicholas Pooran’s 25 (36 balls), the visitors never truly challenged the target and they were eventually bowled out for 155 in 33rd over of their innings.

Mohammad Nawaz had a man-of-the-match performance, picking up four wickets in the innings for quite a miserly 19 runs, in his allotment of 10 overs.  Mohammad Wasim picked up 3-34 off his 4.2 overs..

“I think we bowled pretty well. However, we sort of rushed the game from a batting perspective. We had a brilliant start, but having said that, we didn’t build partnerships, we didn’t bat long enough and as you see, when you don’t do those things against a good opposition, this is the result,” Hosein said after the match.

“It was a tough day for us, coming out on the losing end. Credit must be given … Nawaz bowled extremely well. In saying that, it was definitely a challenging wicket but we didn’t put together a partnership and Nawaz kept on top of us and he kept taking wickets. We kept [getting out] softly [but] I wouldn’t say batsmen gave their wickets away. We knew we had to dig deep and give ourselves a chance … Today wasn’t our day and we take that.”

This result means Pakistan have an unassailable 2-0 lead in the series and gained another 10 points in the ICC ODI Super League points.  The third and final match will be on Sunday at the same venue at 4pm (7am Eastern Caribbean/6am Jamaica).