The Home of West Indies Cricket
News
/
match report
/
Hope thrills with ton in 100th match, but Axar is super hero for India

Hope thrills with ton in 100th match, but Axar is super hero for India 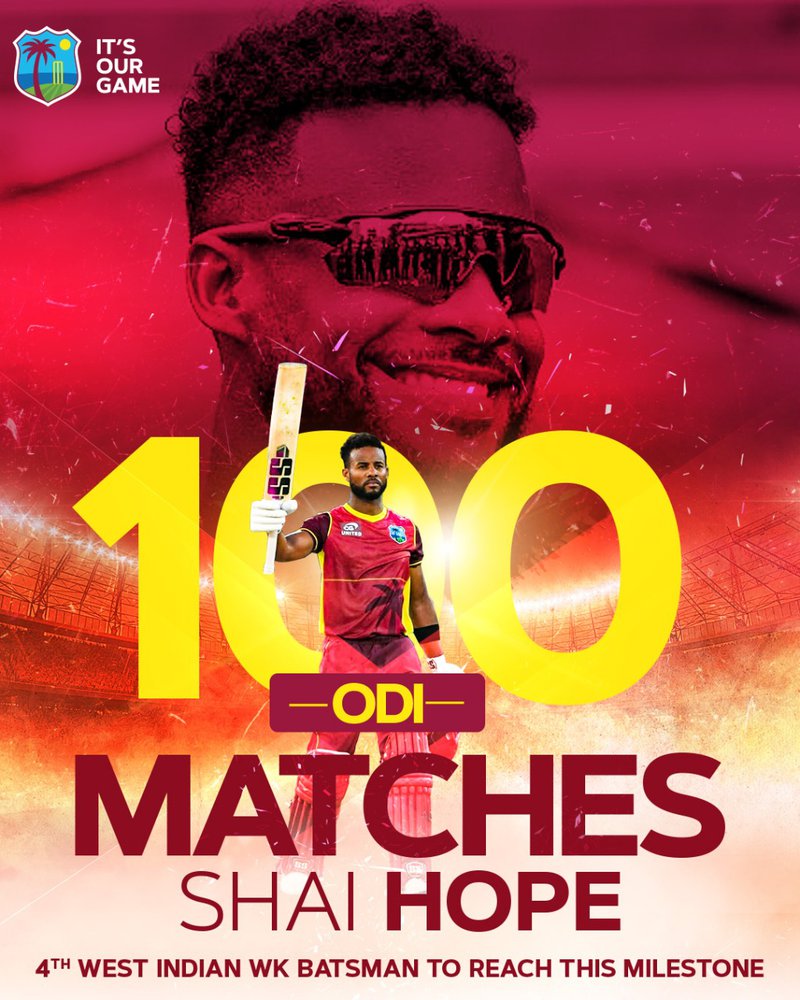 Hope thrills with ton in 100th match, but Axar is super hero for India

PORT-OF-SPAIN, Trinidad – Shai Hope’s 13th ODI century in his 100th appearance brought a colourful crowd to its feet, but India pulled off the highest-ever run chase in this format at Queen’s Park Oval and third-highest in the region, in the second thrilling encounter of the series.

Our #MastercardPricelessMoment, a memorable innings from Shai Hope to hit an ODI Century in his 100th ODI match.💯 #WIvIND #MenInMaroon pic.twitter.com/1YB30rp8Ek 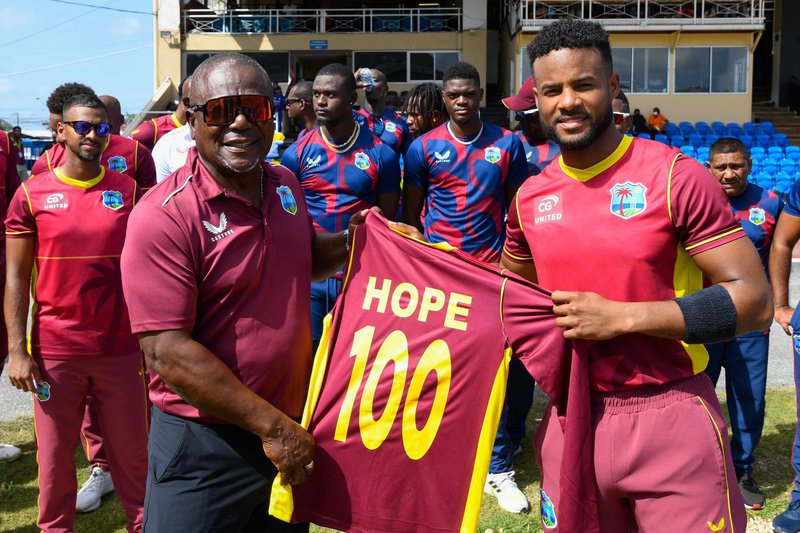 Batting first, West Indies played extremely well to set the visitors a target of 312 after Hope made a superb 115 off 135 balls at the top of the order. But the Indians scorched 100 runs from the last ten overs to get over the line with two balls to spare, taking a 2-0 lead in the three-match series. For the second match in a row over 600 runs were scored at a rate of better than a run-a-ball.

They required eight runs from the last over but scraped only two runs from the first three balls to increase tensions, before Man-of-the-Match Axar Patel struck a high full toss from seamer Kyle Mayers for a straight six to end the contest. Axar, came in at Number 7 and hit a topscore of 64 not out off 35 balls, while Shreyas Iyer made 63 off 71 balls and keeper Sanju Samson, 54 off 51 balls.

For West Indies, the defeat was their second close result in three days after they narrowly missed out by three runs in pursuit of 309 in the opening match at the same venue last Friday. West Indies looked in control throughout, fast bowler Alzarri Joseph (2-46) and Mayers (2-48) making critical strikes to help limit India to 212-5 after 40 overs, before Axar’s brilliant intervention that was laced with three fours and five sixes.

THIRD HUNDRED OF THE YEAR

Earlier Hope’s third ODI hundred this year provided the foundation for West Indies’ 311-6 off their 50 overs, after they opted to bat first. Left-hander Pooran hit 74 from 77 balls while Mayers (39) and Shamarh Brooks (35), helped propel the Caribbean side to their second 300-plus total in as many outings.

Hope struck eight fours and three sixes, adding 65 with Mayers for the first wicket, 62 for the second wicket with Brooks before adding a further 117 for the fourth wicket with Pooran who hit a four and six sixes in scoring his second half-century in three innings.

Hope reached both his landmarks in style – launching leg-spinner Yuzvendra Chahal over square leg to reach his half century in the 21st over before smashing the same bowler for a straight six to bring up triple figures in the 45th over. He became the fourth West Indian to reach a century in his 100th ODI, following Gordon Greenidge against England in 1988; Chris Gayle against England on 2004; and Ramnaresh Sarwan against India in 2006. 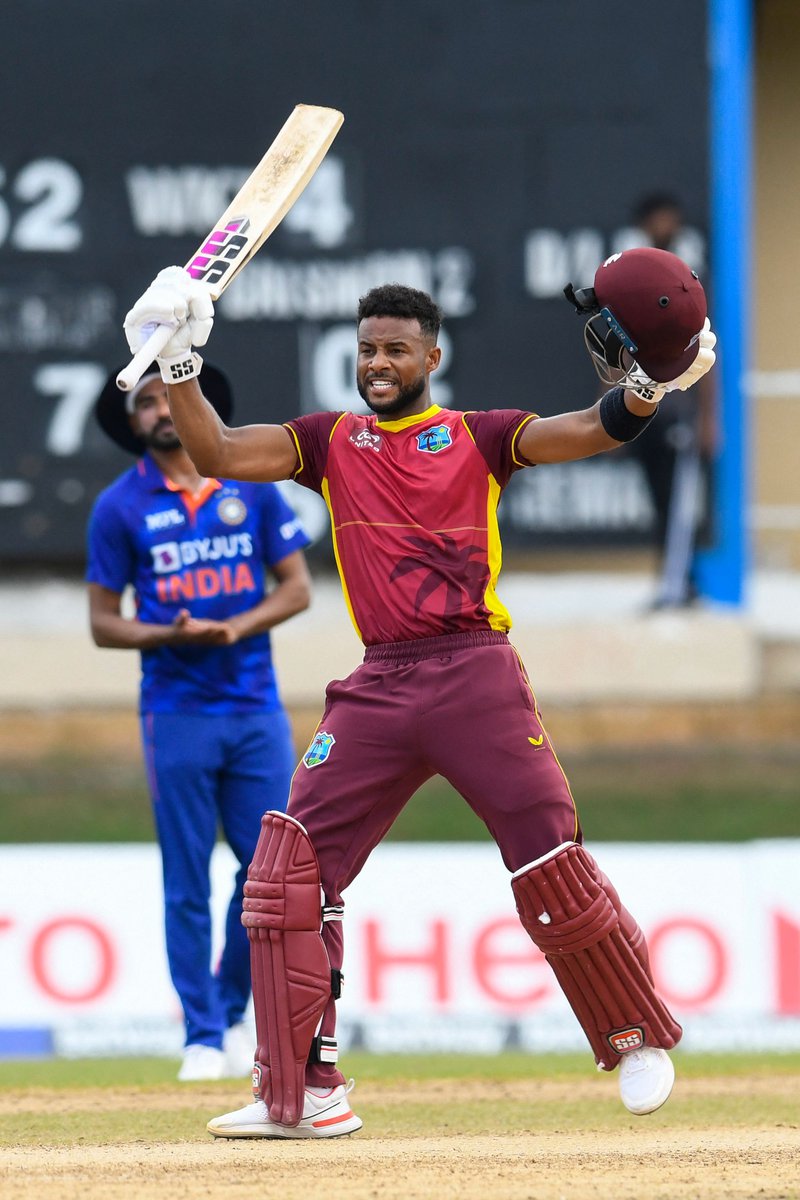 GET TICKETS FOR WEDNESDAY’S CLIMAX

The series will climax on Wednesday with the third match at the same venue. First ball will be at 9:30am (8:30am Jamaica Time).

Fans can purchase their tickets at www.windiescricket.com/tickets avoiding the need to queue at the box office and allows fans to choose their preferred seat in advance. The Windies Tickets service, presented by Mastercard, provides advance tickets for every West Indies home fixture, delivering tickets securely and directly to fans’ ticket accounts to store on their mobile devices or to print out for entry into to the stadium.

Fans can also purchase tickets from box offices at Queen’s Park Oval and the Trinidad and Tobago Cricket Board (TTCB) headquarters at the National Cricket Centre, Couva from 10am to 4pm daily leading up to each match day. Stadium box offices will open two hours before the match start time on each match day. For all matches, adults can purchase half price tickets for children under the age of 16 and seniors can also benefit from half price tickets too.