Tickets on sale for the ICC Women's World T20

All eyes of the cricket world focused on the West Indies when the launch of the first-ever stand-alone ICC Women’s World T20 2018 took place across all the three host countries on Thursday, 26 July. The street parties bowled off in Antigua and Barbuda, Guyana, and St Lucia as hundreds of eager fans marked the start of the countdown to the global event.

The ICC Women’s World T20 2018 will be played from 9 to 24 November and hosts the West Indies will defend the title they won in Kolkata, India, in 2016. Buy tickets here: https://tickets.worldtwenty20.com/ 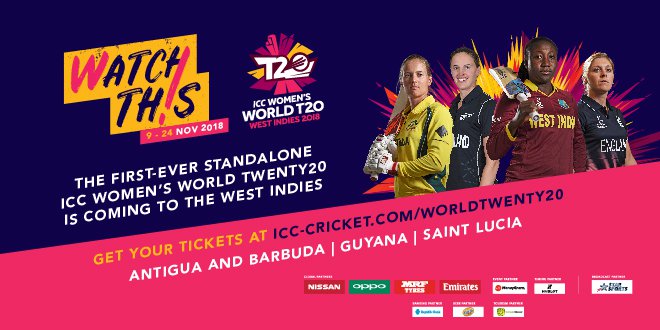 Nelecia Yeates, Head of Commercial for the tournament, said three giant bats – standing 20 feet tall – will be erected across the host territories to display all the information and will also serve as markers across the countries.

“This was a great event as we launched the ICC Women’s World T20 tournament in the three host territories. It was fantastic to see so many people turning out to participate and get the first look and admiring the amazing giant bats.

“The countdown is on to November. Now, with the launch of the theme song as well, we are well on the road to hosting this event. We believe fans will come on board and feel the excitement and the vibes. They will surely answer the call to Watch This as we prepare to showcase this amazing region. Players will love this, fans will love this, the whole cricket world will watch and love this!”

The campaign also showcases the vibrant West Indian culture and lifestyle. It incorporates dancing and music, with a catchy theme song. In the coming months various activities will be held in three host territories featuring musicians, entertainers as well as past and present cricketers.

The tournament will feature the 10 best teams in the world. Defending champions the WINDIES are in Group A along with Bangladesh, England, South Africa and Sri Lanka, while Australia, India, Ireland, New Zealand and Pakistan form Group B.

The event kicks off at the Guyana National Stadium, starting with India and New Zealand. In the second match, Australia will play Pakistan and the Windies round off the day playing Qualifier 1 under lights. This venue will also host matches between arch-rivals India and Pakistan on 11 November and trans-Transman adversaries Australia and New Zealand two days later.

The Daren Sammy Cricket Ground in St Lucia will be the other venue for the group stage with the first match there pitting England against Sri Lanka on 10 November, while the Sir Vivian Richards Cricket Ground in Antigua will host both semi-finals on 22 November and the final on 24 November.

All 23 matches of the ICC Women’s World Twenty20 2018 will be broadcast live to maintain the momentum and focus on women’s cricket, while the Decision Review System (DRS) will be used for the first time in any ICC World Twenty20 event, ensuring consistency in the use of technology in top world-level events.

The ICC Women’s World T20 is the first ICC event taking place in the Caribbean in eight years. In the ICC World T20 2010, the women’s event was staged alongside the men’s event and in the final played after the men’s final in Barbados, Australia had defeated New Zealand by three runs.

Book your tickets to the matches here: https://tickets.worldtwenty20.com/