The Home of West Indies Cricket
News
/
Special Feature
/
GANGA: Cricket is sport for life, be grateful for the opportunity to play it

GANGA: Cricket is sport for life, be grateful for the opportunity to play it

Cricket West Indies (CWI) will host the ICC Men’s Under-19 Cricket World Cup from January 14 to February 5, 2022. The 14th edition of the premier age-group event will feature 16 teams in four groups with matches to be played in Trinidad & Tobago, Antigua & Barbuda, St Kitts & Nevis, and Guyana. In the build-up to the tournament, we will share several feature articles with players and officials, who represented West Indies in Youth ODIs and Youth Tests.

Former West Indies batter Daren Ganga, now turned international commentator, forged a reputation as one of the leading captains in Caribbean cricket after coming out of the 1998 ICC Men’s U19 Cricket World Cup where he played alongside future West Indian team mates Chris Gayle, Ramnaresh Sarwan and Marlon Samuels. Ganga spoke about his transition experience from youth to senior cricket while giving his advice to current West Indies U19 Rising stars ahead of the World Cup.

That West Indies U19 World Cup in South Africa 1998 was my first taste of West Indian “blood” as they say. It was the first time I got a chance to play for that great West Indian brand and it was one of the most memorable experiences I’ve had. As they say, first impressions last and it was the first time I got to wear the maroon outside the region. I recall myself and Chris Gayle flew into that tournament as replacement players and it so happened that we both opened the batting for West Indies throughout that entire World Cup. The records will show that Gayle scored the most runs in that tournament and Ramnaresh Sarwan took the most wickets.

For me as a young player coming out of school cricket and having had the chance to play in the West Indies regional tournament it was a chance to match myself against the best U19 players in the world. It gave me a yardstick to where I was as a young player, further motivated me to want to play for the West Indies senior team and it would have given me a know-how of what I needed to work on as a young player in my pathway of development. I was able to achieve all three things from my experience of playing.

So although the cricket on the field was not where we wanted it to be, we ended up playing the Plate final as we didn’t qualify for the main pool after the group stage – Gayle and myself started our chemistry as an opening pair in that tournament. If I recall in our first game versus Australia when we had a 100-run opening partnership. Overall we put together a good opening relationship from that tournament that put us in good stead for international cricket.

Off the field we developed great relationships with players from other countries. The tour was also my and many of the players in that group's first trip to that country and coincidentally for me South Africa became the country I made my Test debut and played my last Test in, thus I have very fond memories of that country. I also had a chance to meet the great Nelson Mandela. Overall it was a rewarding experience and one I wish for any U19 player.

Playing with Gayle, Sarwan and Marlon Samuels at the West Indies U19 level before graduating to the senior team. 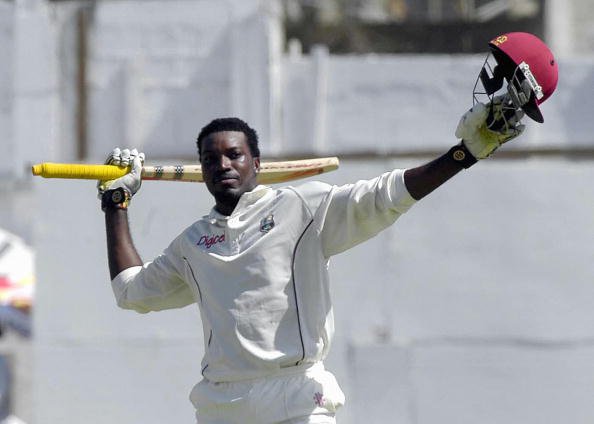 First I’d like to say they should be proud that the Caribbean region is playing host to this U19 World Cup in 2022. For me as a former West Indian player I feel very proud that our region is playing host to this competition. It will unearth some of the best talents in world cricket overtime and the young West Indies players will be one or two of them who will go on to dominate in world cricket and represent the region. I would say open your minds as young U19 cricketers and enjoy the experience of the West Indies. Our culture is very unique, hospitable, warm and welcoming. So make sure you get a chance to not only experience our West Indian pitches but the great legacy that exists across the venues you will be playing on - but make sure you get a chance to take a piece of the West Indian culture with you as well. For our own West Indies U19 players understand you and extension of Cricket West Indies and the West Indian people, make sure the tournament is a grand one and lift that title.