Deandra Dottin gave a reminder of her immense batting ability with a vital knock on Monday as she became only the second West Indian women to reach 3,000 ODI runs. Her topscore of 71 came off 123 balls and included six fours and a six, but again the West Indies Women were beaten by the South Africa Women, who now hold an unassailable a 3-0 lead in the five-match series.

Asked to bat first, West Indies again faced trouble at the top of the innings when opener Hayley Matthews and Chadean Nation fell within the powerplay. Matthews was caught and bowled by Shabnim Ismail and three overs later Nation was snapped up at second slip by Dane van Niekerk off Marizanne Kapp. They would make for 157 off 48.4 overs and the Proteas responded with 158-2 off 36.4 overs. 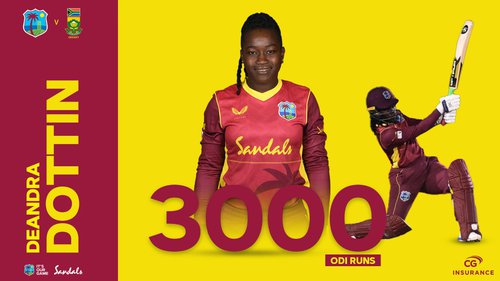 Dottin entered at 9-2 in the fifth over and when she reached her 20th half-century joined Stafanie Taylor in the 3000-run club. Dottin led a brave partnership with newcomer Rashada Williams, who made her third appearance and played a solid knock of 37 off 79 balls which was the perfect foil for Dottin. The 24-year-old got off the mark with a superb straight drive off Kapp and looked settled throughout before she was third out – caught at cover.

This ended the partnership of 77 with Dottin and from there the West Indies slipped from 86-2 to 102-5. Ismail returned for a second spell where she picked up two more wickets and ended with 3-31. She also had a run with a direct hit from mid-off and was named the CG Insurance Player-of-the-Match.

In the run-chase, openers Lizelle Lee and Laura Wolvaardt again guided South Africa. They posted an opening stand of 122. Lee ended on 78 not out with nine powerful fours, while Wolvaardt struck six boundaries in 53. Left-arm spinner Qiana Joseph earned two wickets for 24 off 7.4 overs to again be the best bowler for West Indies.

The two teams will move over to the Sir Vivian Richards Stadium for the fourth and fifth matches on Thursday and Sunday. First ball is 10am (9am Jamaica Time).