Introducing a new series, 'CricViz T20 Legends', with the world-leading analysts taking a look at the finest T20 players to come out of the Caribbean.

Dwayne ‘DJ’ Bravo is one of the most successful, iconic, and long-standing players in the history of the T20 format. He is as entwined with this form of the game as anyone, present and influential throughout many of its most celebrated moments, and a key part of many of its greatest teams. An inventive and creative seamer and a more than useful late order hitter, Bravo is without question one of the finest Caribbean T20 players ever.

When T20 began to be played at the top level of the game, many questioned how the value of a wicket would change, asking whether batsmen would just slog from ball one and, as a result, the worth of a wicket-taking bowler would fall. As we have seen, this hasn't been the case - wickets are crucial, with teams seeking to balance their side and include enough bowling, and the exposure of the tail as much an issue in T20 as any other version of the game. As such, the value of wicket-taking bowlers has been key, and Bravo stands as one of the most impressive. An astonishing career tally of 497 wickets, across almost nine thousand balls bowled, is a remarkable marker of dominance. No player in history has taken more T20 wickets - truthfully, no player has even come close. Even Lasith Malinga, without question a fellow member of the T20 hall-of-fame, is within 100 wickets of Bravo's haul. 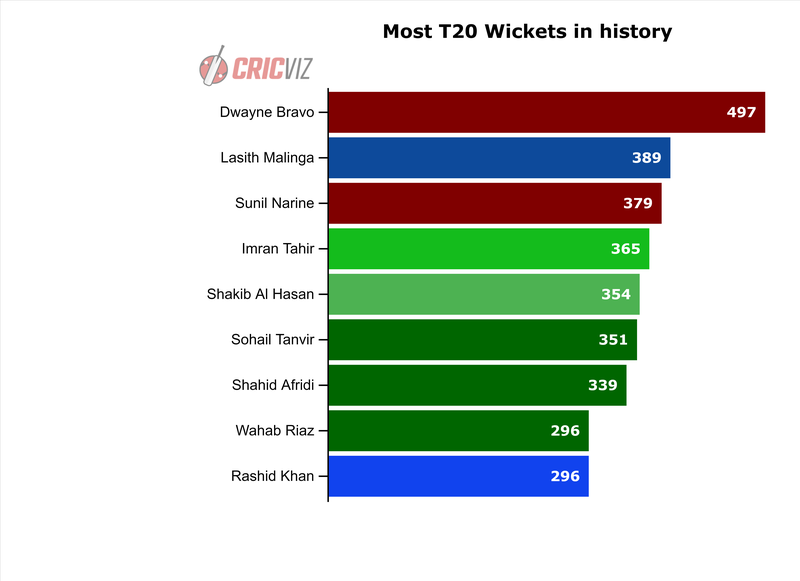 That 'almost nine thousand' - to be specific, 8869 - is historic in its own way. No bowler has bowled more deliveries in this format than Bravo, and he's well ahead of Sunil Narine, his compatriot having more bowled more than one thousand deliveries fewer across his not inconsiderable career. 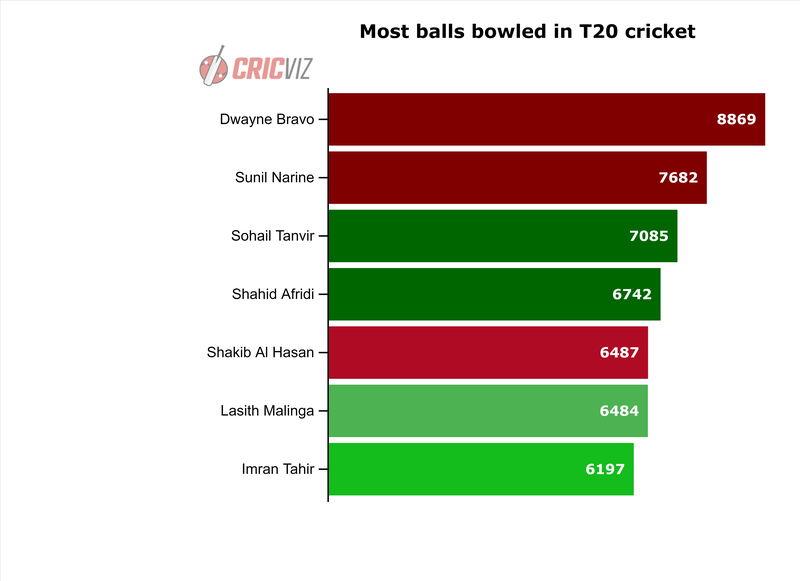 Bravo's career is not defined only be longevity, of course, but also by success. He has been on the winning side more than almost anyone. Bravo has won 257 T20 games in his career, a figure that can be bettered only by Kieron Pollard on 277. His Windies teammate has played 46 more matches as well, and Bravo himself boasts as slightly higher win percentage - he's come out on top 56% of the time, compared to Pollard's 55%. In the Indian Premier League, Bravo has been a crucial part of the Chennai Super Kings set-up. Led by MS Dhoni, CSK are one of the most successful sides in IPL history, having won three titles (and only Mumbai Indians, with Pollard in their ranks, having won more). Add to that two World T20 titles in 2012 and 2016, as well as the three Caribbean Premier League titles won with Trinbago Knight Riders, and Bravo's trophy cabinet is as impressive as they come. 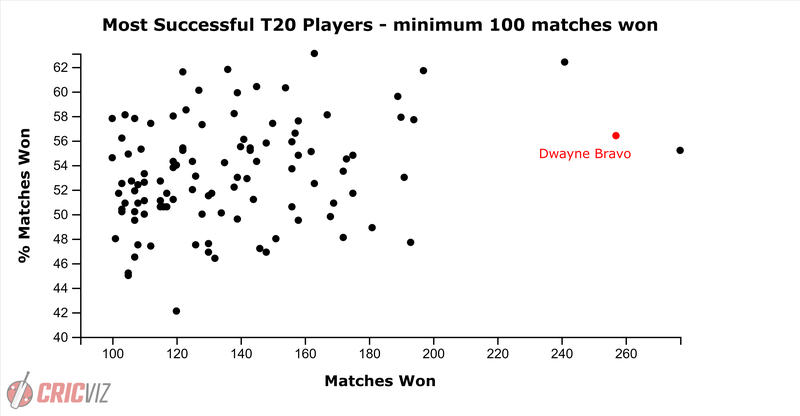 The most defining feature of Bravo's game, and the success it brought him, was his wide range of variations. Slower balls, cutters, dipping yorkers and sharper-than-expected bouncers, it was the range and breadth of Bravo's armoury which was so daunting to batsmen the world over. In the earlier days of T20 as bowlers were finding their feet, and exploring the game, Bravo stood firmly at one end of the spectrum. Before 2010, he bowled 19% slower balls, a figure which none of the established seamers in the world could beat, barring Irfan Pathan who bowled 23%. He was at the forefront of the development of the slower ball variation in this format of the game, and in the next few years would take it further. Partially a function of his age, but also a genuine tactical choice, Bravo moved to bowling roughly half of his deliveries as change-downs; between 2015 and 2017, he bowled more slower balls than quicker balls. 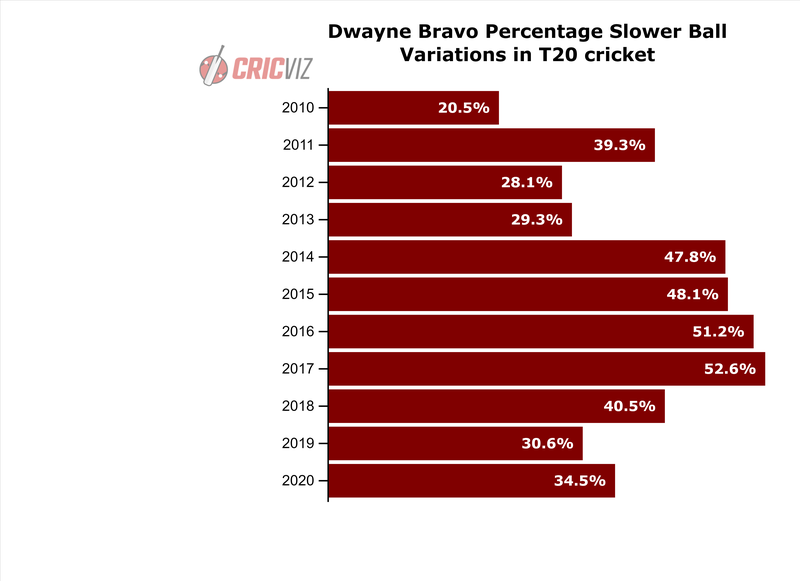 Within that variation range, are a number of specific deliveries: the iconic dipping slower ball yorker, the slower ball bouncer, the cutter. The last of these is interesting, in that Bravo made it through his whole career (and all the success it brought him) without really bowling leg cutters. 42% of his deliveries deviated from left-to-right (i.e. an off cutter) but just 4% of his deliveries went the other way. This could easily have made him predictable, but such was Bravo's mastery of the three main slower variations, he needn't have worried.

Bravo has always been renowned for his effectiveness at the death, and rightly so. His economy rate in the death overs (9.4rpo) is a tough higher than we might expect, but he is very often bowling the penultimate and final overs in the innings, the highest scoring even of those in the death phase. Compared to the average for all players who have bowled in the overs Bravo has, he goes at 1.3rpo less, showing that he is saving his team valuable runs whenever he operates in this phase of the game. 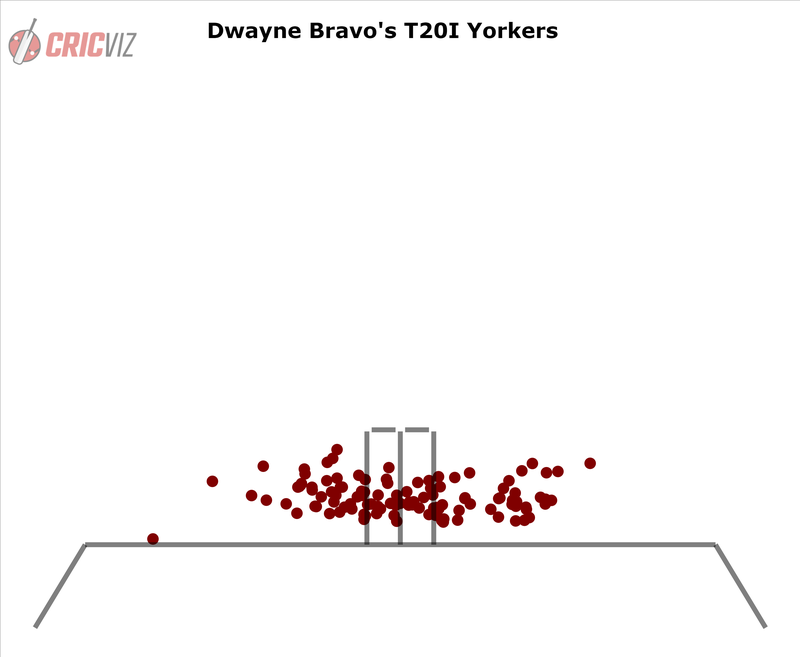 As T20 grows larger, more and more prominent in the cricketing calendar, Bravo's influence is only going to grow. Equally, the recognition of his influence is only going to grow, as more bowlers follow in his footsteps and explore the area of the game in which he blazed a trail. With T20 now establishing itself as an element of cricketing life as sophisticated as ODIs and Tests, the early work of Bravo and players like him in laying the template are only going to be more appreciated, in the years to come - a fitting place in history for one of the greats.