Introducing a new series, 'CricViz Classics', where the world-leading cricket analysts take a look at the very finest West Indies performances in the modern era.

Once very common, West Indies Test victories in England have grown increasingly rare. Since 2000, where the hosts came out 3-1 victors in a five-match series, West Indies touring sides have only won one Test match on English soil - but what a win it was.

Headingley 2017, as the West Indies chased down an improbable 322 to win, was an historic moment. It was, at that time, the 20th highest successful chase in Test history, as well as the 11th highest away from home. What’s more, it represented the pinnacle of one young man’s career to date. Shai Hope, with scores of 147 and 118*, dominated the match, and in doing so became the first man to score two Test centuries in a single match at Headingley, a venue that has been hosting Test cricket since 1899. A century in each innings of a Test match is not something that happens every day. 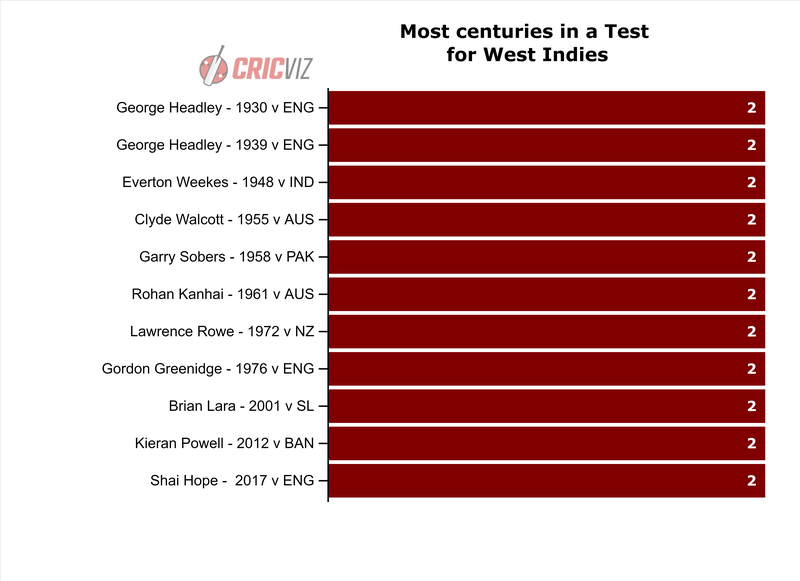 But away from the record-books, the way Hope actually batted in the Test is deserving of more attention. Because, despite his run tally, he didn’t play without risk. The average false shot percentage in that Leeds Test as a whole was 18%, but for Hope himself it was only 17% - lower, but not by anywhere near as much as you would expect for a player performing so far above the rest. However, one aspect of his risk which does merit attention is that he batted with more security as the game went on. In the first innings, he played a miss or an edge 21% of the time, but in the second innings that fell to 16%. Whilst conditions didn’t deteriorate hugely across the game, to actually play with less risk in the second dig is very surprising. 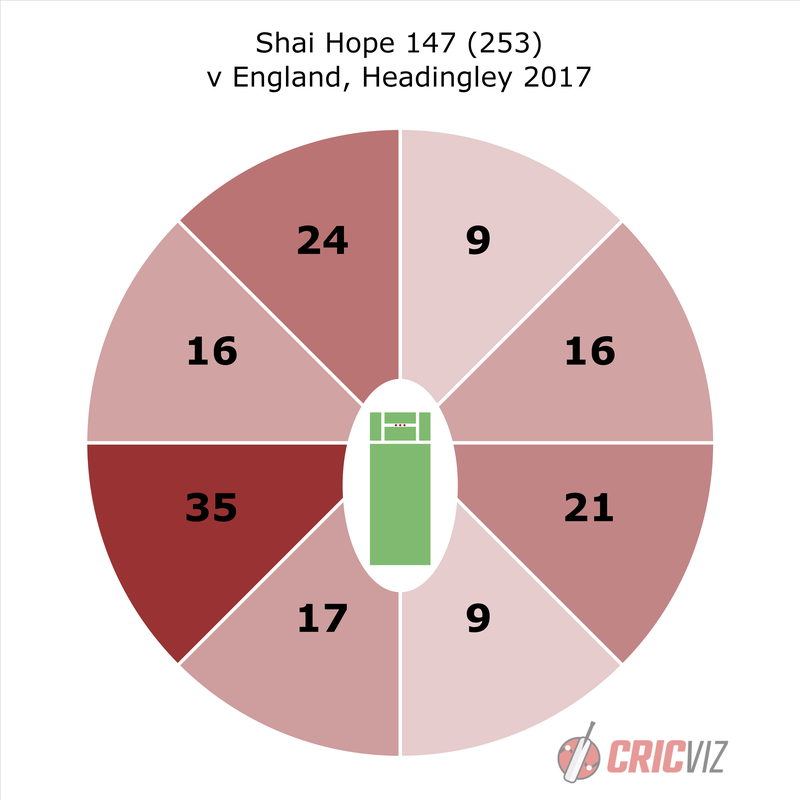 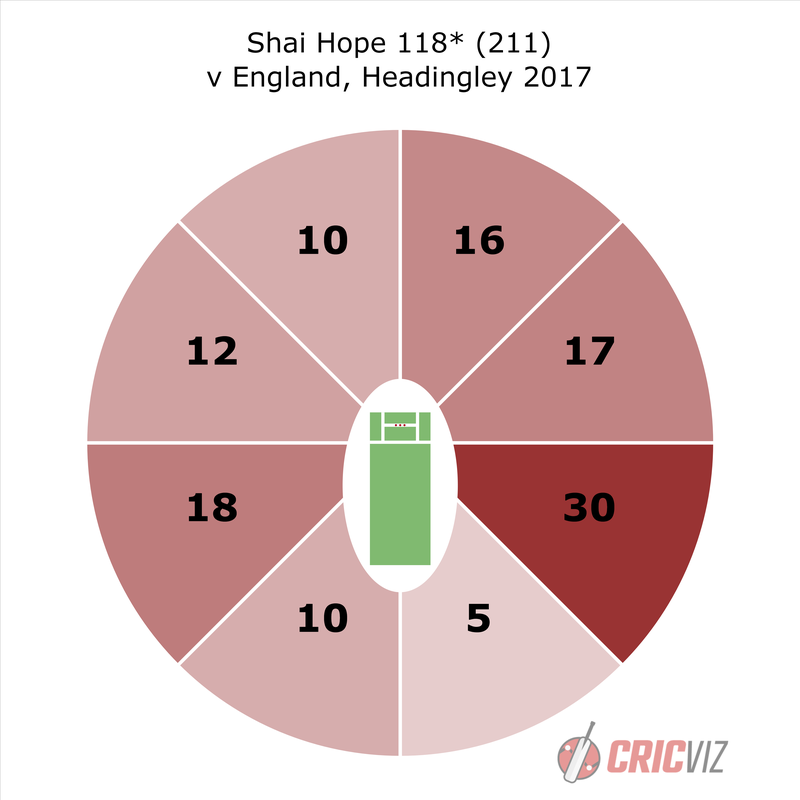 One clear technical difference between Hope and the rest of the batsmen in this match was the point at which he was intercepting the ball. When facing the seamers, Hope was making contact with ball just over 2 metres down the track from his stumps - 206cm, to be precise. Hope was batting further down the track than anyone else in the match, and two men more than used to playing in English conditions - Joe Root and Alastair Cook - were batting a full 60cm deeper in the crease, on average, across the Test. Whilst this wasn’t necessarily a magical cure for playing the moving ball (the man batting second furthest out of his crease, Kyle Hope, contributed just three runs against pace in the match), it clearly worked for Hope. Whether by disrupting the England seamers' natural lengths, or by negating the more dangerous late swing by coming at the ball earlier, Hope was able to render the quicker bowlers largely ineffective.

Against the spinner, Moeen Ali, Hope opted to just stay busy. In the second innings of the match he only attacked 12% of the deliveries he faced from Moeen, marginally less than the 14% he attacked against the seamers, but he focused on constantly scoring rather than playing big shots. During that record chase he attempted to rotate the strike with 49% of his strokes against spin, well up from his career average of 31%. Moeen is an attacking bowler who does allow runs to flow, but Hope kept his head and just ensured the scoreboard ticked over without going too hard. By negating the quicks, and milking the spinners, Hope constructed a perfect innings.

According to CricViz’s Wicket Probability model (which looks at the ball-tracking data for deliveries and calculates the likelihood of them leading to a run/wicket), the balls that England bowled to Shai Hope across that Headingley Test would, on average, have brought a score of 237-8. For Hope to turn that into 265-1, both scoring and retaining his wicket more than expected, is testament to what an extraordinary achievement those innings were. 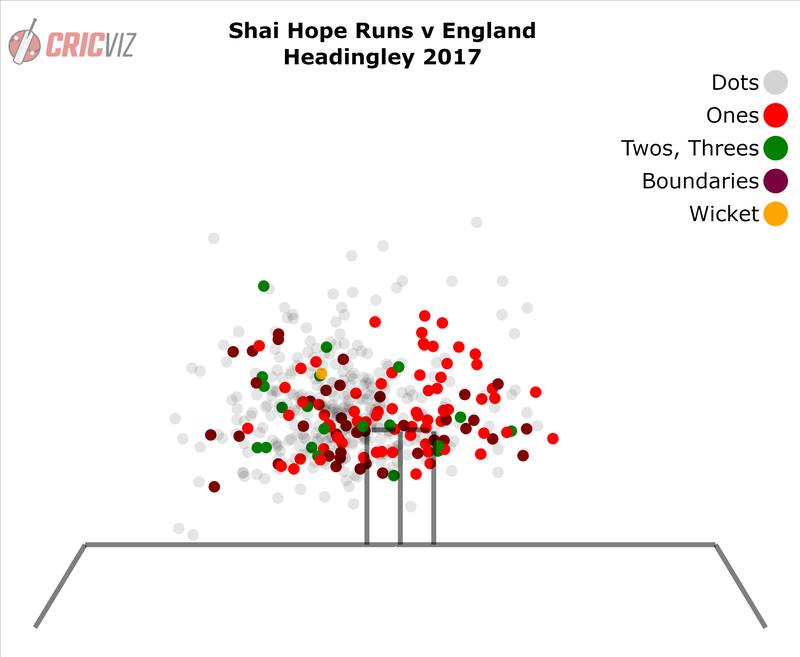 Hope is still only 26 years old, is a solid presence in the two longer international formats, and without doubt has a lot of cricket ahead of him. But even if he never played another match in maroon, he can look back at what he was able to pull off in Leeds that August, and know that he has a place safe in the history books.