This was a superb debut series for the 26 year-old fast bowler Navdeep Saini who took five wickets across the three matches at a True Economy Rate of -1.46 runs per over below expectation based on the overs that he bowled in. Saini was picked for the Indian team on the back of a superb IPL season for Royal Challengers Bangalore where his pace in particular caught the attention. It was that ball-speed that once again set him out in this series. Saini’s average speed of 133.86 kph was 12th fastest ever recorded by an Indian bowler in a T20I series of three or more matches. 19% of Saini’s deliveries were faster than 140 kph. 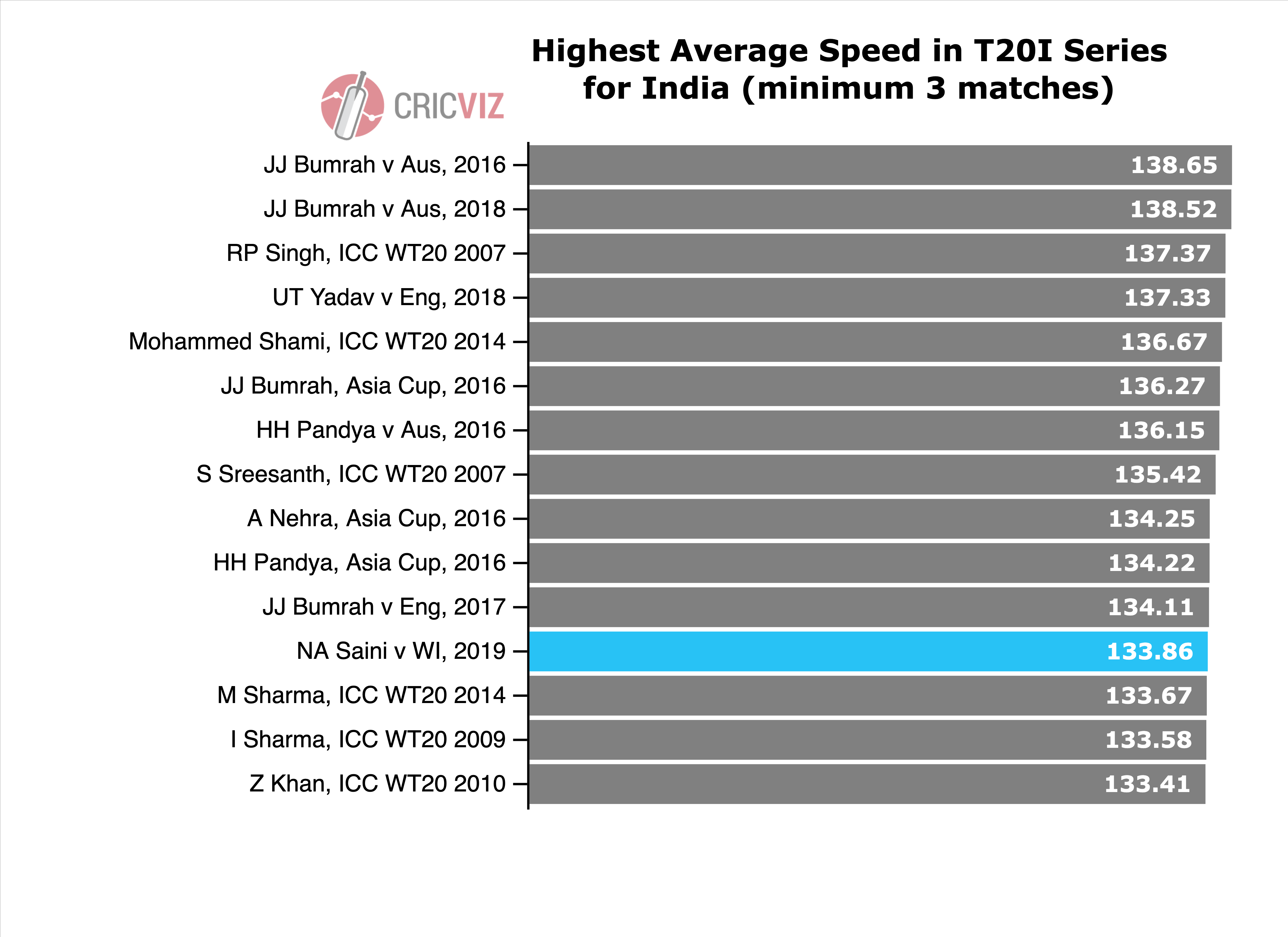 The West Indies top order really struggled in this series. Across the three matches their first two wickets produced a combined total of 29 runs - an average of 4.83 runs per partnership - that is their lowest aggregate in a three match series ever. The individuals who contributed to this slump were Evin Lewis (10 runs in three innings), Sunil Narine (six runs in two innings) and John Campbell (0 runs in one innings) as openers and Shimron Hetmyer (1 runs in one innings) and Nicholas Pooran (39 runs in two innings) at number three. 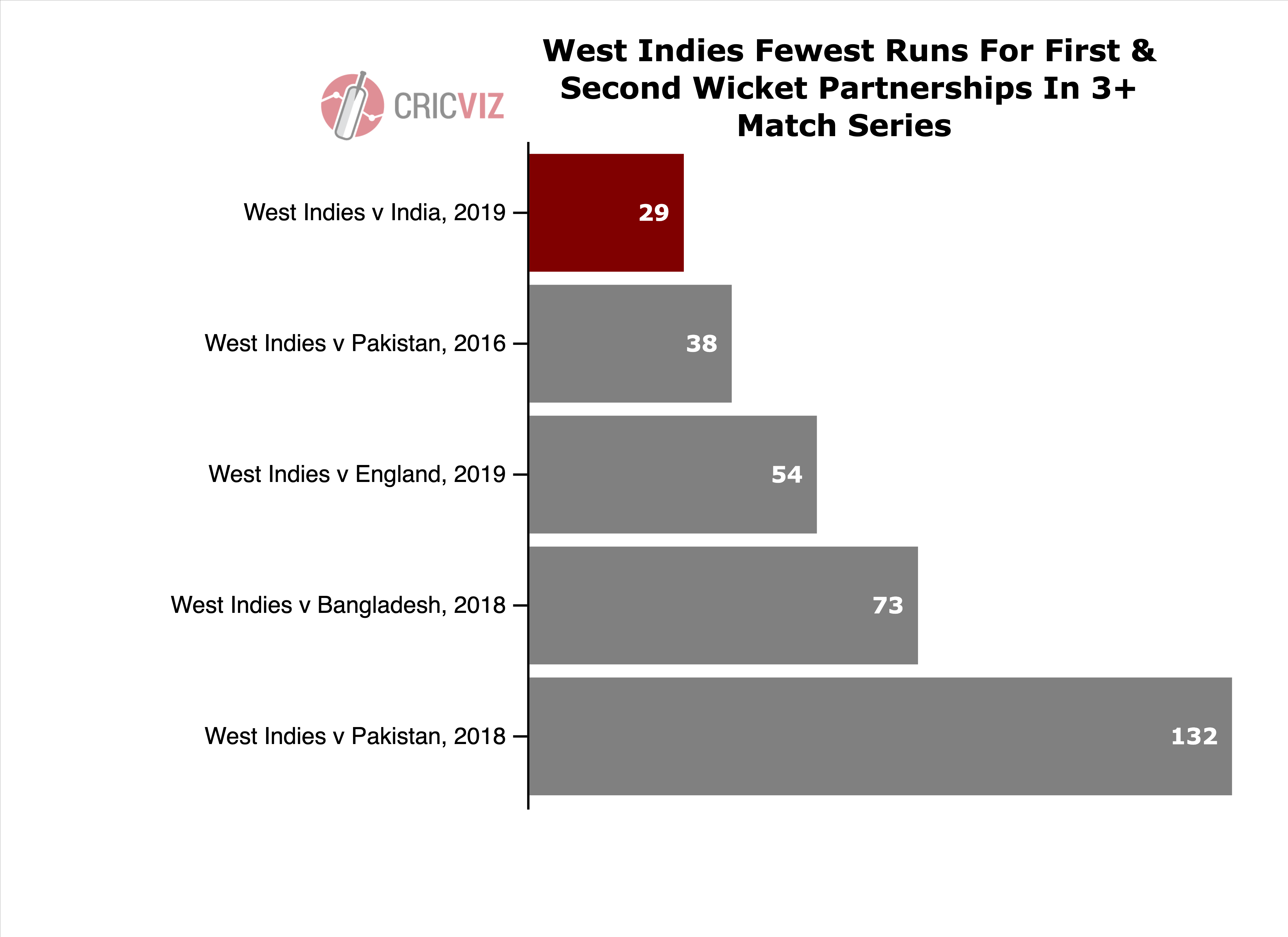 One of the few positives to emerge from this series for the West Indies was the return to the team of Narine - playing his first T20I series for the West Indies since late 2017. Narine struggled with the bat - twice assuming a pinch-hitting role at the top of the order, however, he was typically excellent with the ball, bowling four overs in all three games and returning a supreme economy rate of 5.91 runs per over - a True Economy Rate of -1.82 runs per over below expectation based on the overs he bowled.

Pollard thrives in the middle order

This series represented a solid return to West Indian colours for the T20 titan Kieron Pollard who registered scored of 49, 8 not out and 58 in only his second T20I series for the West Indies since the start of 2018. Throughout the majority of his career Pollard has largely assumed a role in the lower middle order, playing 80% of his innings from number five or lower. However, in this series he batted at number four in both of his substantial innings. This continues a trend for the Trinidadian of excelling in this notoriously complex position. Since the start of 2017 Pollard has batted at number four 19 times and scored at a strike rate of 155.60 - among players to have batted this often in the position only Asif Ali (163.74), AB de Villiers (163.62) and Rishabh Pant (160.27) have scored at a faster strike rate. 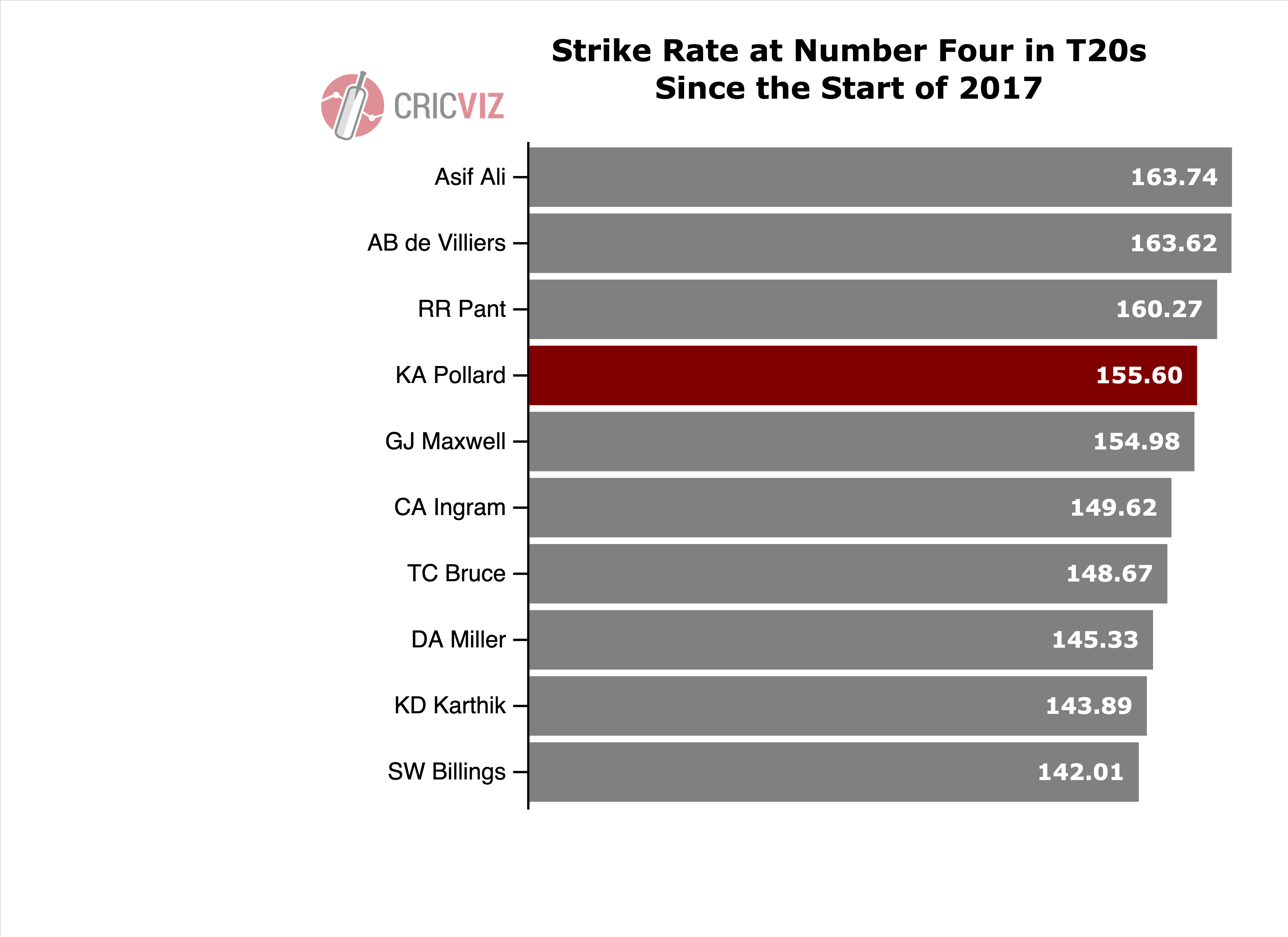 Deepak Chahar only played one of the three matches in this series but he made a superb impression taking three wickets in his three overs and only conceding four runs. Chahar was selected for India’s squad thanks to his strong IPL where he thrived as an opening bowler who made early inroads and kept a lid on the run rate in the Powerplay. Early wickets are exceptionally valuable in T20 and in Chahar India appear to have found a seam bowler capable of delivering them: since the start of the year no bowler in the world has taken more Powerplay wickets than Chahar’s 19. 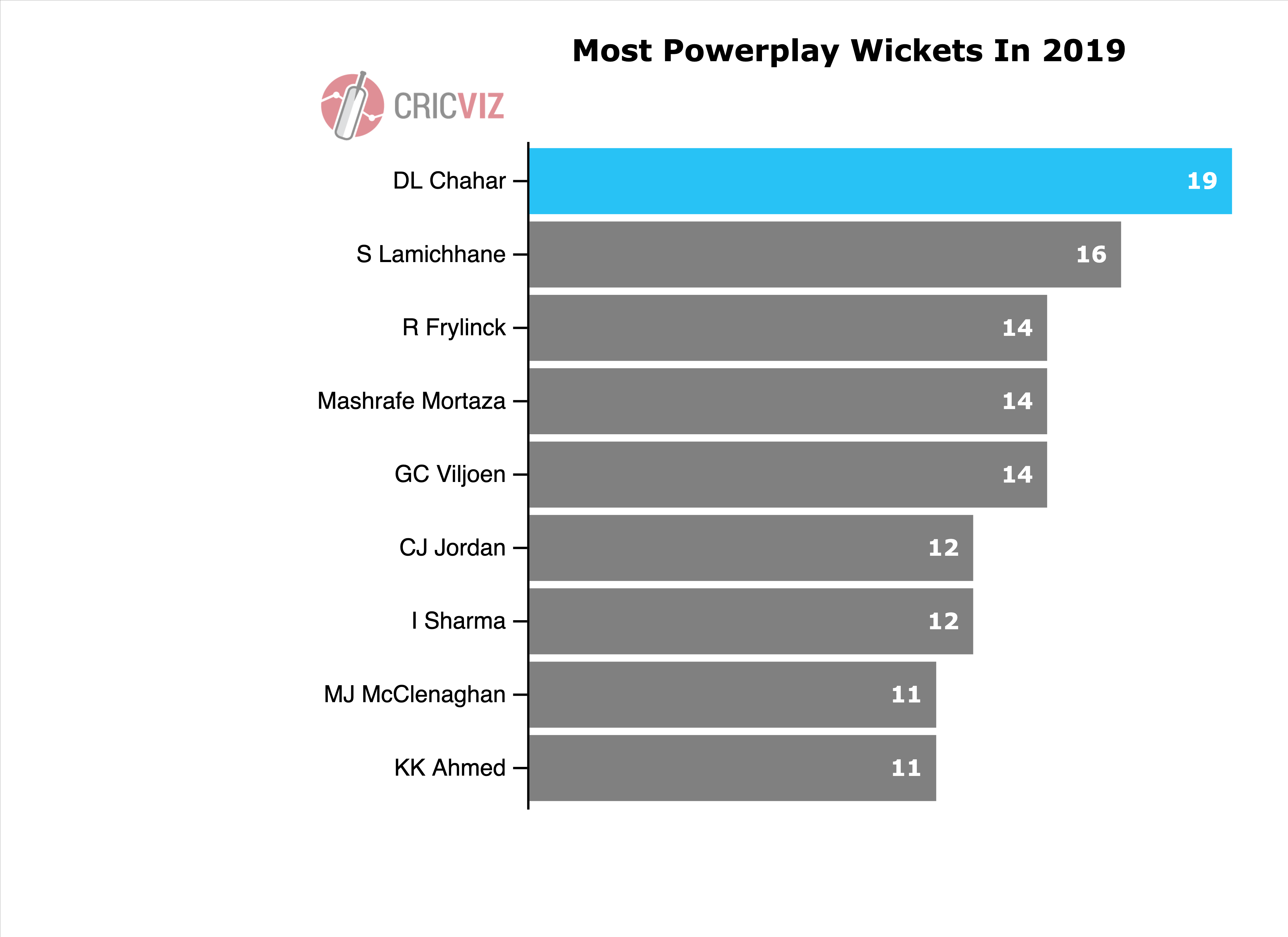 This series represented a significant step in the evolution of one of cricket’s most exciting young talents: Rishabh Pant. Assuming greater responsibility at number four Pant scored a match-winning 65 not out in the last match of the series, guiding India to their target. In the last few years Pant has become one of the world’s best T20 batsmen - his standout strength is his ability to score heavily and quickly during the middle over phase, typically the toughest period of the innings. Since the start of 2018 only Colin Ingram and AB de Villiers have scored more runs in overs 7 to 15 than Pant. 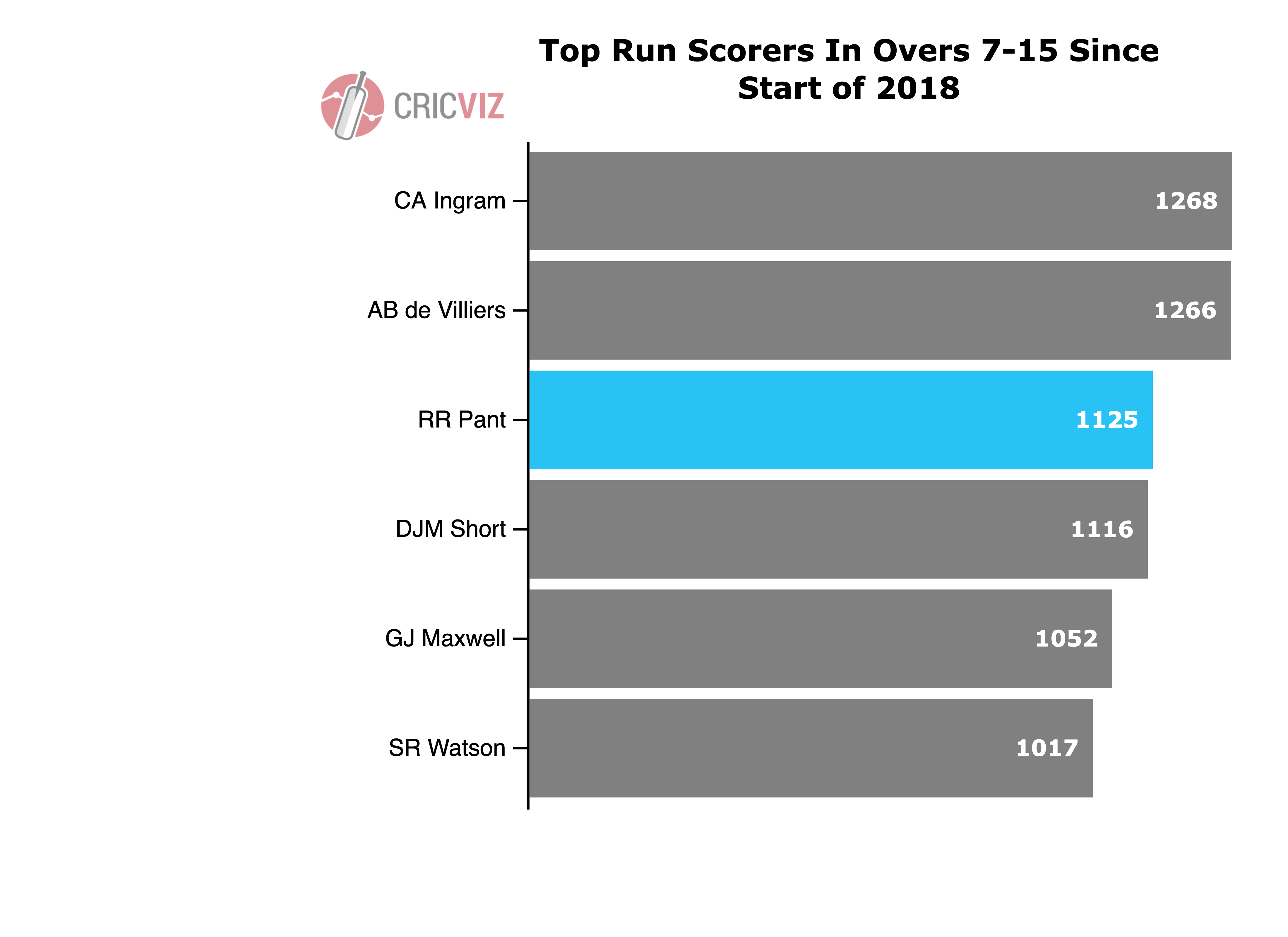