Patrick Noone picks the CPL Team of the Tournament, based on CricViz data

The breakout star of the 2019 CPL, Brandon King topped the run-scoring charts with 496 runs for Guyana Amazon Warriors. The 24-year-old scored his runs at a rate of 8.93 runs per over, with the standout innings his remarkable 132* from 72 balls in Qualifier 1 against Barbados Tridents. King struck 32 sixes in the tournament, more than any other player, with all of them coming in an arc between mid-wicket and mid-off; a simple method, but one that proved richly effective. We can expect to see plenty more of King in the years to come. 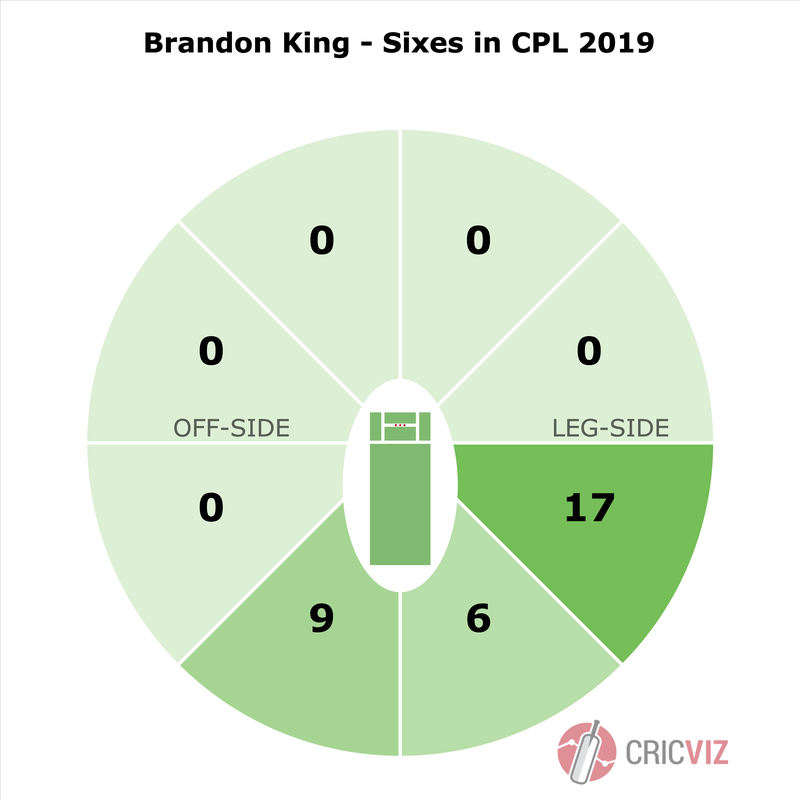 Originally only signed by TKR as a replacement player for Colin Munro, Lendl Simmons ended the tournament as the second-highest run-scorer, passing 50 in five of his 11 innings. Simmons was aggressive from the off, attacking more than any other player who faced 200+ balls. Simmons was a consistent performer for TKR, even as his side's results fell away in the second half of the season, regularly getting off to a flyer and only registering one single figure score in the tournament. 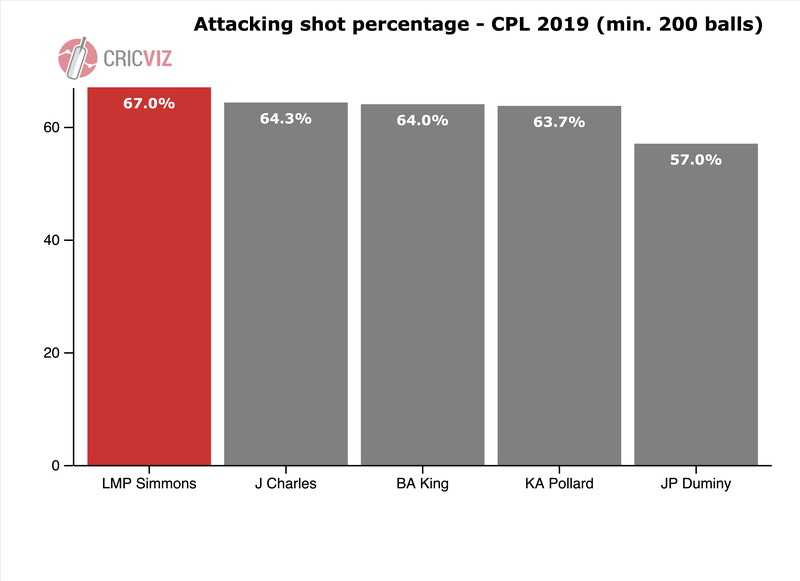 The New Zealand wicket-keeper excelled in a struggling side, plundering 374 runs at the top of the Tallawahs' batting order. Phillips was particularly destructive against the seamers, crashing along at 10.38 runs per over with the pull shot his primary weapon of choice (50 runs from just 21 pull shots against seamers). He began the tournament with three 50+ scores before fading as the Tallawahs' play-off hopes diminished, but his strike rate remained high despite not being able to always go on and convert his starts.

Promoted to the top of the order after previously occupying one of the middle order spots, Cornwall was a shining light in a mixed campaign for the Zouks. He's perhaps a better batsman than the label 'pinch-hitter' would suggest, but Cornwall's role was simply to tee off and give the Zouks a platform upon which to build. It was a role he thrived in, scoring two fifties and regularly scoring at more than ten runs per over, finishing with the highest run rate of any batsman who faced 100+ balls in the Powerplay. 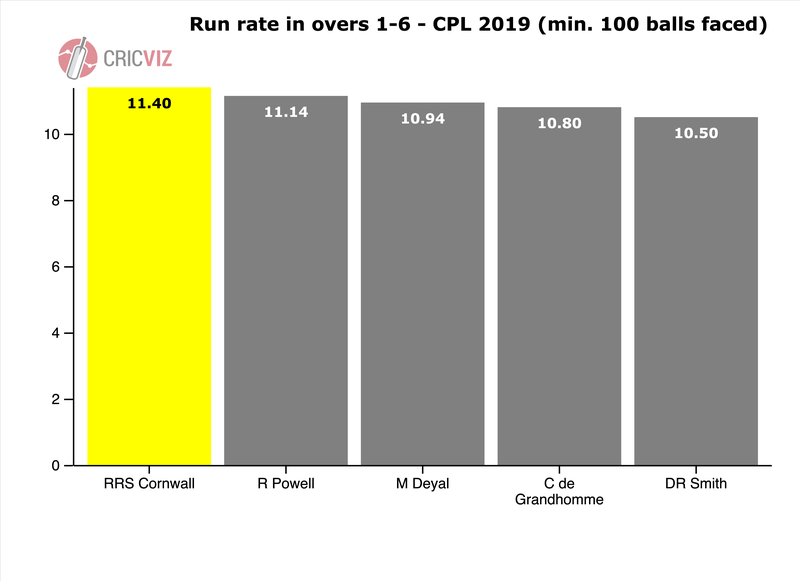 The Pakistani all-rounder led the Amazon Warriors to within a whisker of their first CPL title, stringing together 11 wins in a row before falling short in the Final. Shoaib was only dismissed five times in 12 innings, regularly adding quick runs at the death - his runs came at 9.18 runs per over during that phase. He used himself sparingly, but effectively with the ball, picking up six wickets and registering an economy rate of just 6.29.

It was a typically brutal campaign for TKR's most reliable hitter. Pollard hit 22% of the balls he faced for either four or six, a rate only bettered by Brandon King of players to have faced 200+ balls in the tournament. Highlights included a 38-ball 71 against Guyana Amazon Warriors and a quick-fire 26, off just nine balls, that got them over the line against St Kitts & Nevis Patriots in the Eliminator. Pollard came into his own during the death overs, smashing 223 runs, 46 more than Fabian Allen, the next most prolific batsman during that phase. 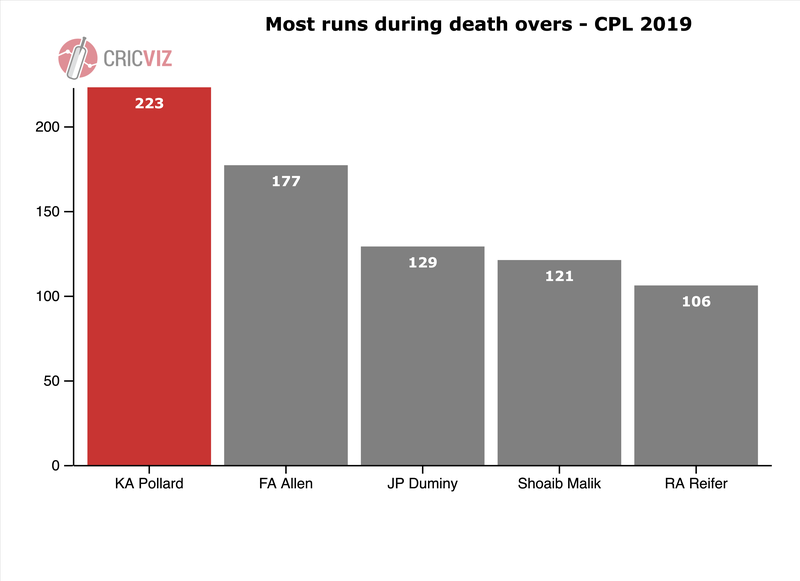 The Tridents skipper led his side to a second CPL title in improbable circumstances, having been a St Lucia Zouks batting collapse away from being eliminated from the tournament before the knockouts. In a competition dominated by spinners, Holder was the joint leading wicket-taker among seamers with 14 scalps to his name. As well as being a wicket-taking threat, Holder kept the runs down as well, finishing the tournament with an economy rate of 7.34, the third best among seamers to have bowled 100+ balls.

Injury prevented the champion spinner from playing more than seven matches in this year's tournament, but he still made an impact with both bat and ball. At the top of the order, Narine showed his usual aggression with the bat and scored at 10.02 runs per over, while he was typically miserly with the ball, conceding runs at just 5.78 runs per over. Narine continued to get good players out, as well as keeping the run rate down, with top six batsmen accounting for six of his seven wickets across the tournament and TKR were unable to win a game when he was out of the side.

The American leg-spinner burst onto the CPL scene with a stellar season that saw him take 22 wickets at the frankly ridiculous strike rate of a wicket every 9.1 balls, as he ended up the leading wicket-taker in his first full season. His standout performance came in the do-or-die de facto quarter-final when St Lucia Zouks were cruising to victory, needing 29 to win from 24 balls with five wickets in hand. Walsh promptly took three wickets in the over before finishing the job off in his final over, giving him four wickets in ten balls for the concession of just three runs. That followed his 5-19 in the Tridents' surprise win over TKR that set the eventual champions on their way and confirmed that Barbados had unearthed a gem.

Walsh might have taken more wickets than the veteran South African leggie, but nobody was more economical than Tahir. He contributed across all three phases of the innings, but it was during the middle overs when Tahir really made an impact. Eight wickets and an economy rate of just 4.62 across the 16 overs he bowled during that phase are numbers that illustrate a bowler in complete control of his game, albeit in the largely spin-friendly conditions of the Providence Stadium in Guyana. Tahir's 16 wickets took him to 62 for the year, only one behind Sandeep Lamichhane in the list of 2019 leading wicket-takers, having played six games fewer than the Nepalese. 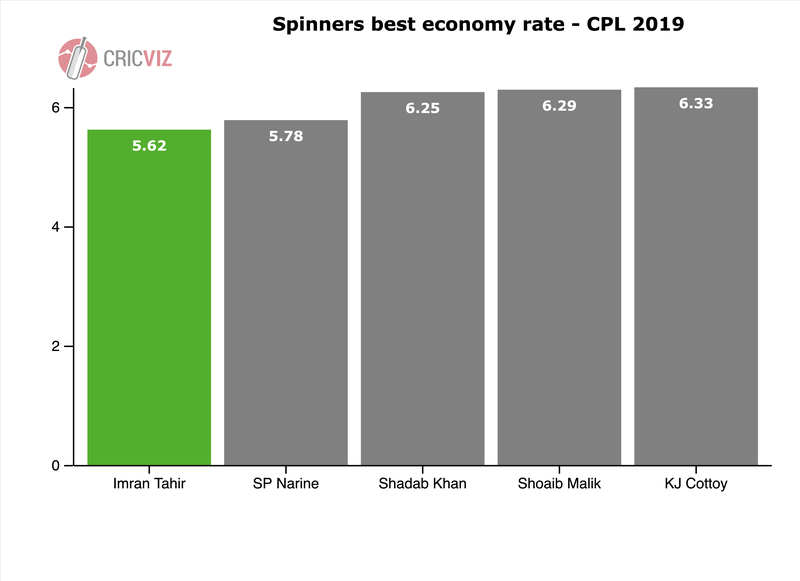 The left-arm seamer extended his stellar run of success, adding a CPL title to the T10, BBL and PSL trophies he's picked up in the last year. Gurney formed part of a potent seam attack with Jason Holder and Raymond Reifer, with the trio picking up 40 wickets between them. Gurney claimed 13 of those, nine of them during the last five overs of the innings as his reputation as a World Class death bowler continues to grow. Nobody took more wickets than Gurney in that phase and his overall economy rate was the best of any seamer in the competition. 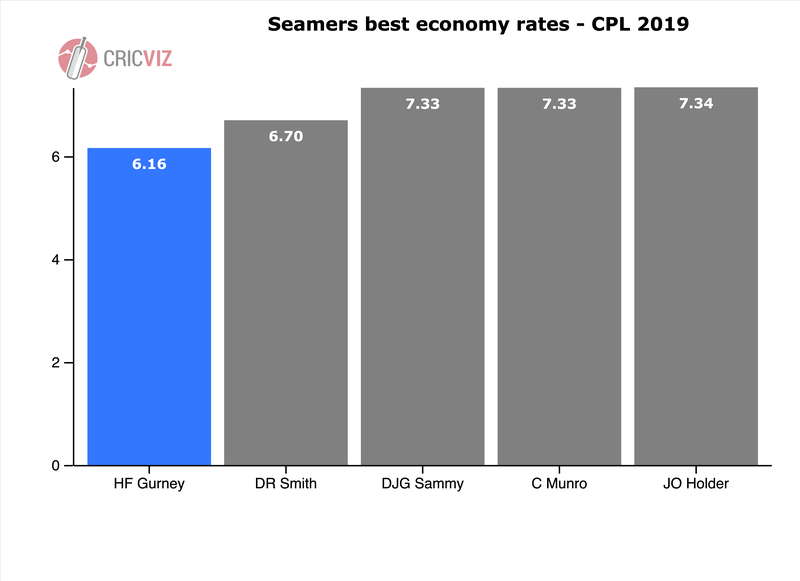