Ben Jones tries to figure out if Kolkata Knight Riders ace Andre Russell, who’s lighting up IPL 2019 with his supreme hitting, can ever be stopped. 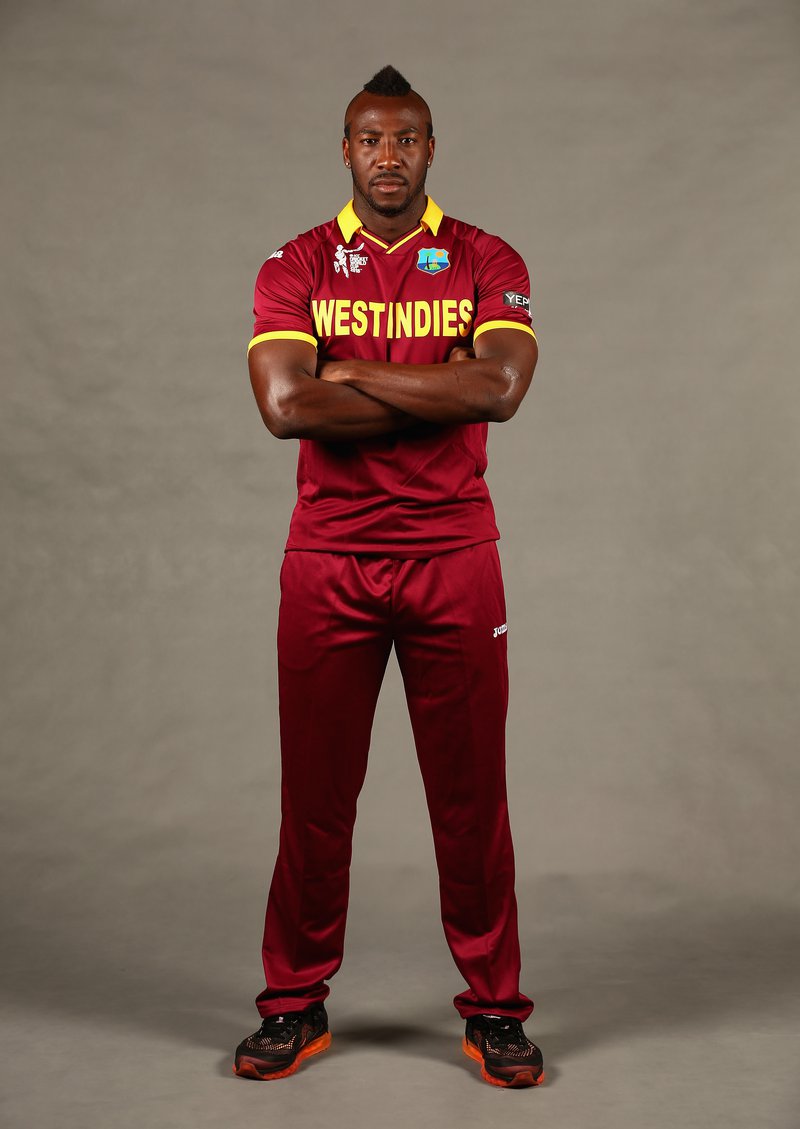 Andre Russell is a poster boy. His game, his aesthetic, everything about the man from the moment he steps into public view, is what T20 is supposed to be about. Vibrant, skillful, powerful and fun.

Specifically, Russell has always been a wonderful hitter. His phenomenal ability to find the boundary is unmatched; nobody to face 1000+ balls since he debuted can match his boundary percentage of 24.27 per cent. Nobody scores more quickly. That sort of skill doesn’t go unnoticed, and as such Russell has always been a coveted T20 recruit, travelling the world on the short-form circuit, the star attraction rolling into a town near you, and you, and you. 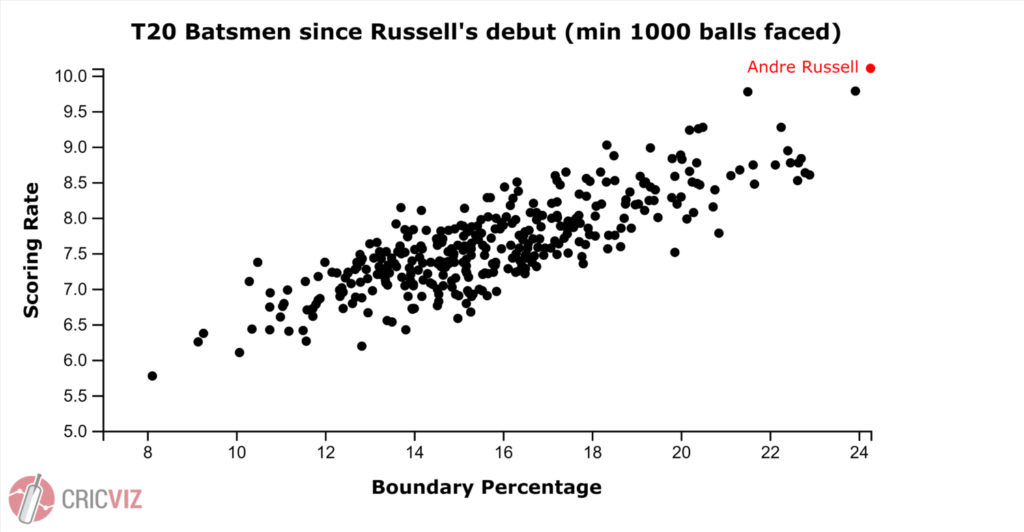 Yet over the last 12 months or so, he has gone up another level. Since the start of 2018, Russell scores at 10.84rpo (runs-per-over) overall, and 11.68rpo at the death; the average for all players who’ve played in the same matches is 8.14 and 9.20. Russell scores more than two runs-per-over faster than those playing on pitches he’s playing on, facing attacks he’s facing. He may not fit cricket’s traditional mould, but Russell is a genius. 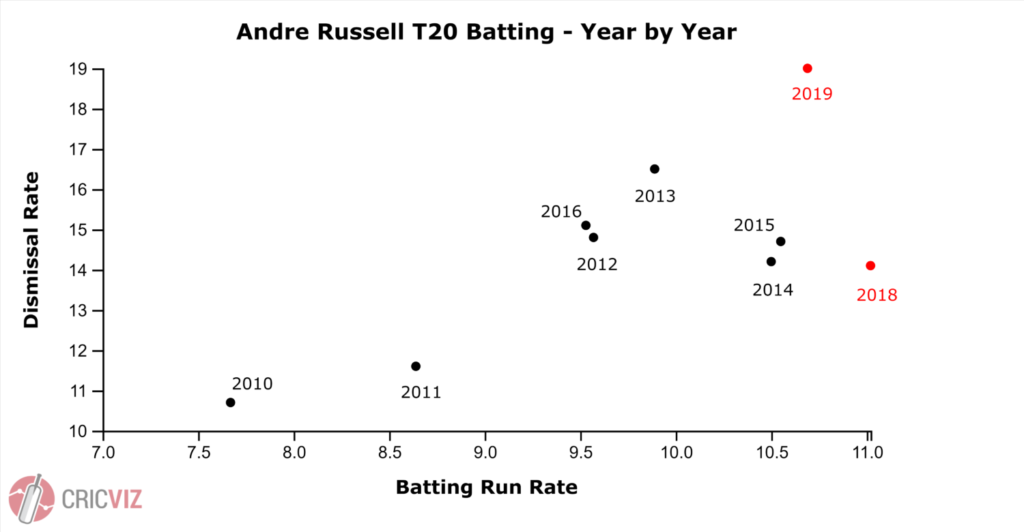 So far, he’s certainly brought that genius to the 2019 Indian Premier League. Scores of 49* (19), 48 (17) and 62 (28) have lit up the competition, Russell taking his place on the bench as a looming bogeyman for bowling sides, every Kolkata Knight Riders wicket a double-edged sword that brings him one step closer to the crease.

Kagiso Rabada’s yorker that dismissed Russell, in the Super Over between KKR and Delhi Capitals, was celebrated as if the South African had slain a dragon, that the immortal had become mortal. In T20, Russell is fast moving towards the mythical status enjoyed by Virat Kohli in ODIs. 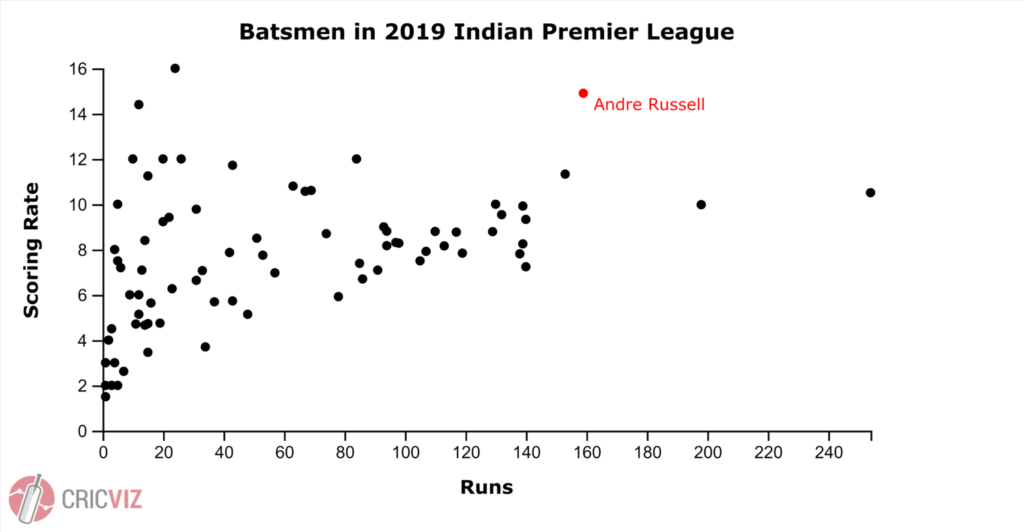 So, considering all this – given the insistence from the league structure that you’ll run into him at some point or other – if you’re an IPL captain, how on earth do you go about setting plans to Andre Russell?

Across his career, there is a clear pattern to the way Russell performs against spin and pace. The West Indian has found it easier to score quickly against faster bowling, but easier to survive against spin bowling.

Of course, we have glossed over a significant event here. Russell’s performance may have exploded in the last 12 months, but he was previously banned for a “whereabouts violation” relating to doping regulations in 2017, when he was removed from cricket for a year and received all the usual slurs. The integrity of everything he had ever done on a cricket field was questioned. Inevitably, when he returned to the game 12 months ago, he returned a different player. What is surprising, as we’ve established, is that he arguably returned a better one.

However, while the quality of his record may have changed, the nature of his batting record hasn’t. In fact, the pattern is amplified. Just like the Russell we had grown used to watching, the post-ban Russell was more secure against spin and more explosive against pace, but the gap between the two had widened. He returned as the batsman he had been before, but with the contrast turned up.

So at the very least this gives a clear path for captains. If you want to contain, bring the spinners on and accept ‘Dre Russ’ will be in for a while; if you want him gone, then bring on the seamers and accept the chaos that could ensue. Reassuringly, this is true throughout the whole innings. At every stage, it is more aggressive to bowl pace to Russell, and more economical to bowl spin. 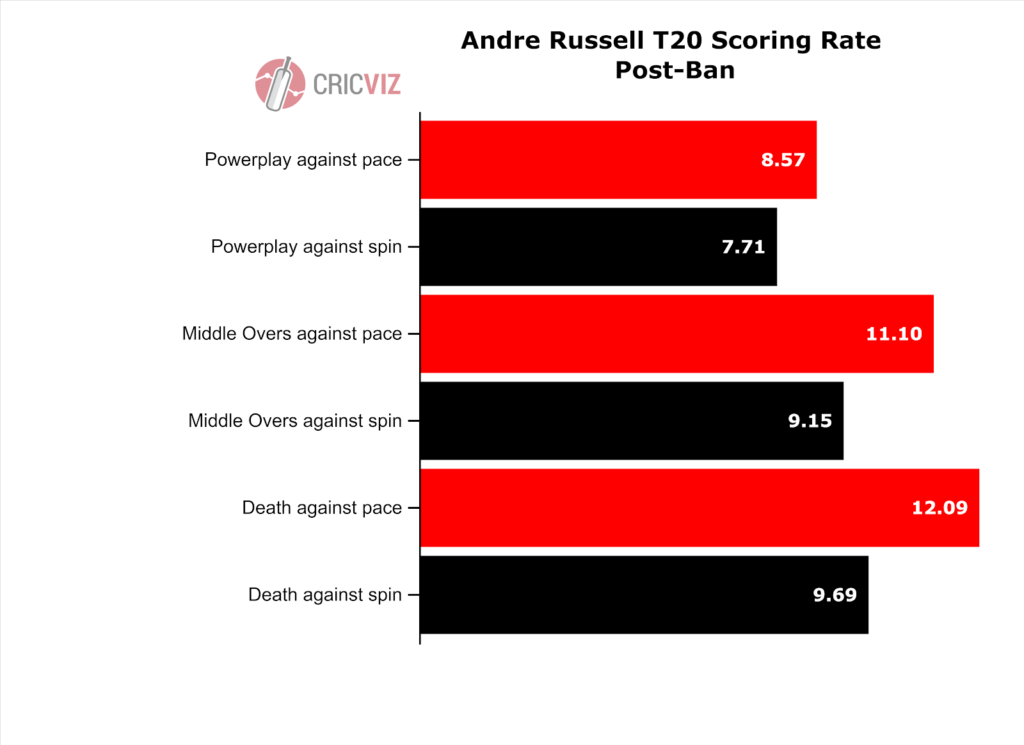 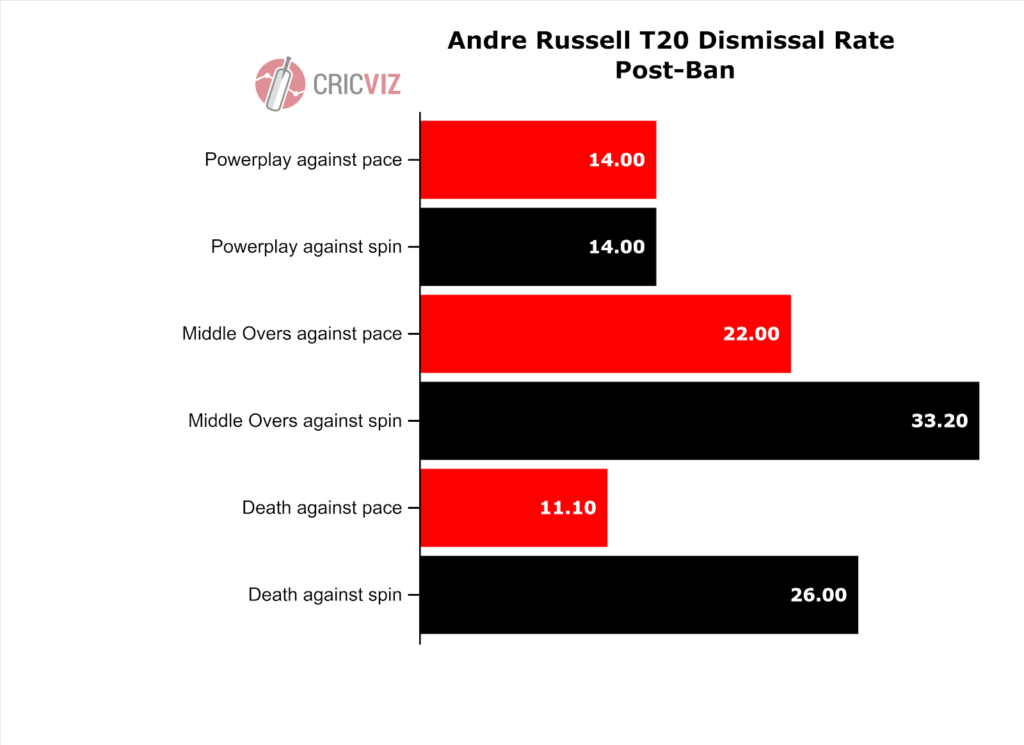 If Russell does make it through to the death, then bowling spin pays. Dismissal rates at the death are significantly less important than scoring rates, so restricting the opportunity for the West Indian to free those muscular arms and crash the ball to the rope is paramount. In general, T20 captains rarely rely on spin in the latter stages – too rarely, given their relative success in this period – but there is a clear benefit to targeting Russell with slow bowling.

In particular, as is often the way in contemporary T20 cricket, your leg-spin bowler is your biggest weapon. Russell has struggled to get the wrist-spinners away since returning; he’s scored at 8.56rpo against leg-spin and 12.23rpo against all other bowlers. If you are lucky enough to have access to a reliable leggie, you’d be best advised to use him against Russell. High stakes cricket, but having the confidence to save your gun leg-spinner specifically for an opposition star can reap dividends, as Kane Williamson found when Rashid Khan removed Jos Buttler last week. 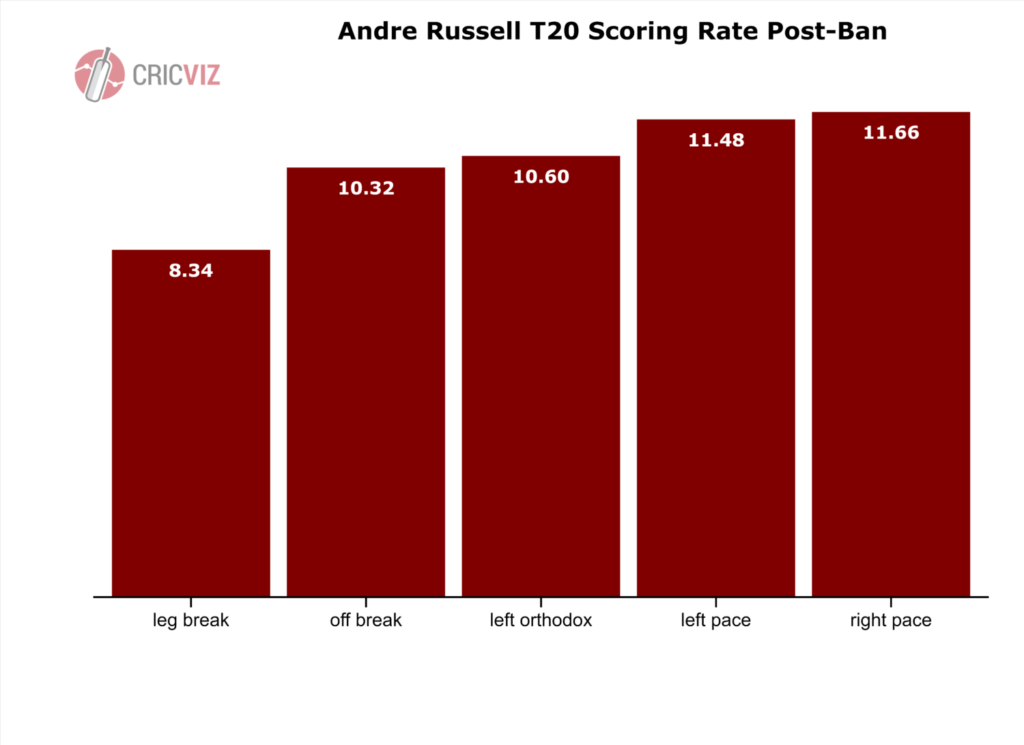 Surviving as a seamer

However, regardless of how careful you are with the deployment of your bowlers, it’s almost certain that you’ll need to send down some pace to Russell at some point. When that moment comes, what do you do? Well, as with everything in T20 cricket, it comes down to a blend of planning and execution. The graphics below show Russell’s strike-rate according to where the ball reaches him, or where the ball pitches. The darker the red, the higher the strike-rate. For bowlers, it’s slim pickings. 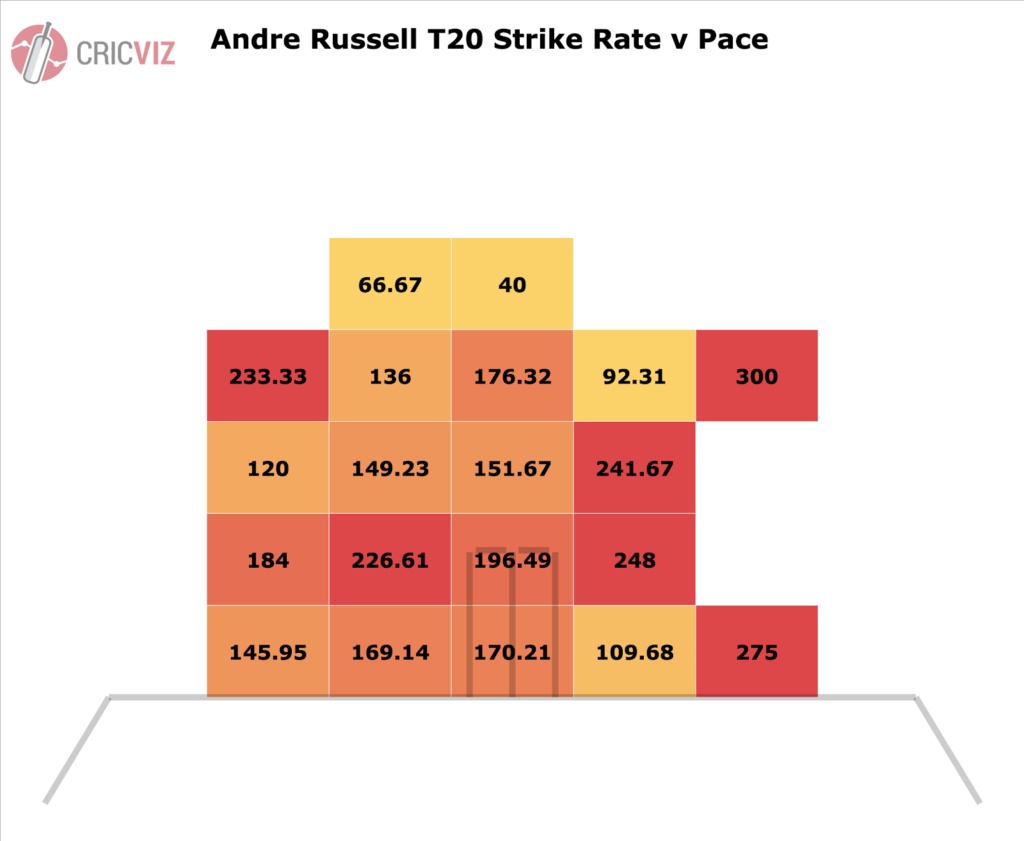 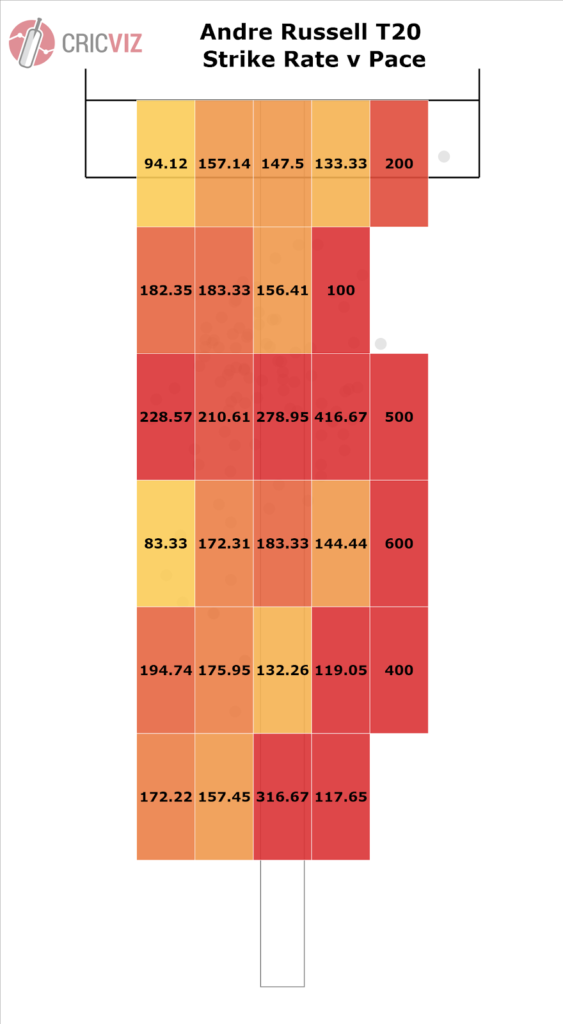 What we can see is that you essentially have two choices – bowl a perfectly executed wide yorker, or drop your length right back with a tight line, most likely attempting to set a trap by putting a man back on the midwicket fence (and distributing helmets to the crowd members in that zone). Neither option is foolproof, to any extent, but there is at the very least a clear warning not to bowl anything in that good-length region.

Of course, Russell is going to bat differently at different stages of the innings, and as such you want to bowl differently to him. If you break those strike-rate graphics down by phase, there is good news and bad news. 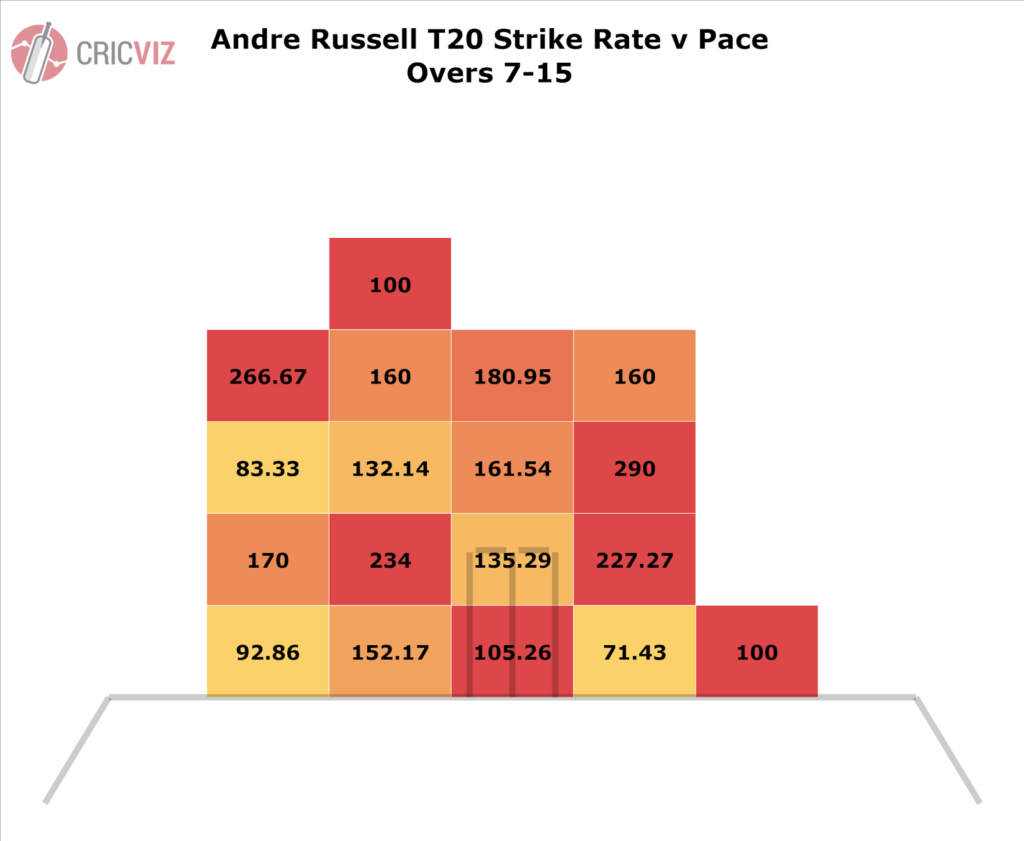 On the one hand, we can see that well-planned, well-executed seam bowling plans in the middle overs can subdue Russell. Anything which forces him to reach wide outside off stump, either back of a length or yorker length, has been effective in the last 12 months. His tendency to plant his feet and hit from a solid base does rather limit his options when the ball isn’t more obviously in his arc.

On the other hand, at the death, seamers really are on a hiding to nothing. Barring the most perfectly executed yorker, pinning his toes to the crease, there is no correct option for the seamer bowling to Russell at the death. Short, good length, full, wide, straight – he has shown, over time, the ability to hit powerfully in any zone.

Of course, this doesn’t mean he’s immune from failure. He will get out to certain deliveries over time, and he won’t always succeed in every game, but there is nowhere you can confidently bowl to him. There’s nowhere to hide. He hits everything. 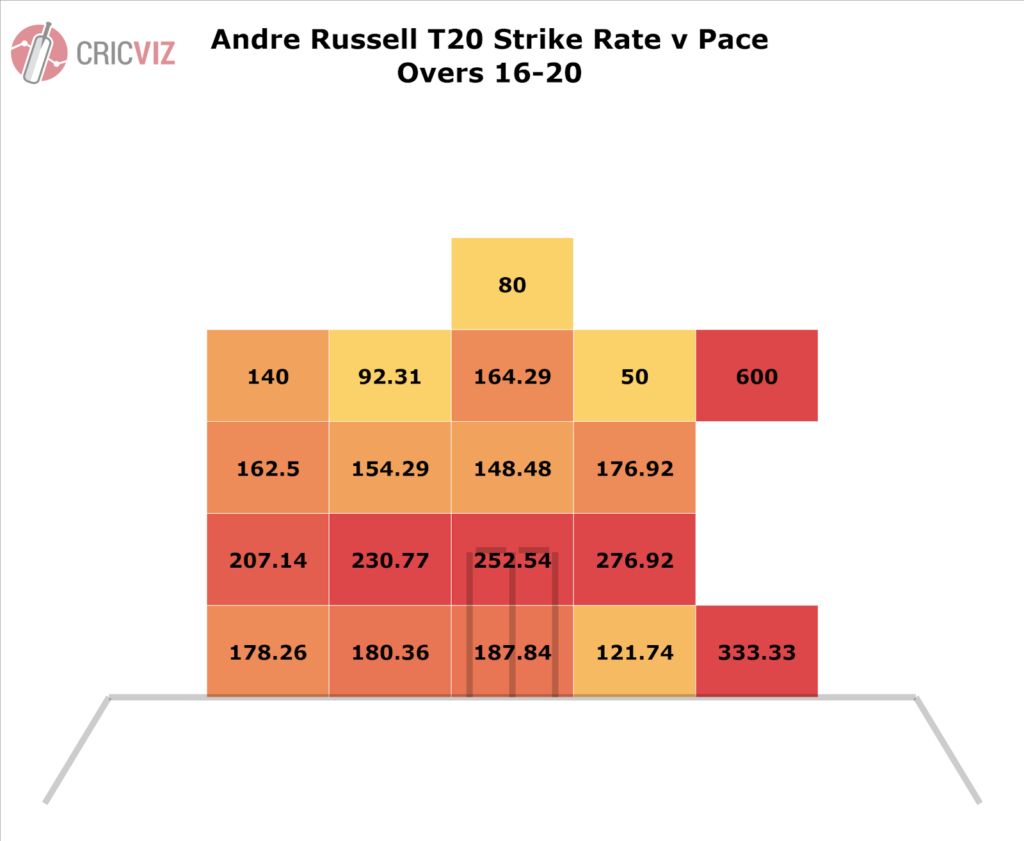 Which is why, not to labour the point, that bowling spin is paramount. The absolute elite fast bowlers in the world will be able to find a way to limit Russell – as Rabada did in the Super Over – but most quicks are left with nothing on their side, chasing their own tails as the ball flies over the boundary. As an IPL captain, if you don’t have an elite fast bowler in your attack – and they’re a scarce resource, that’s sort of the point – then you are significantly better off keeping spin on against Russell, even when the death overs arrive.

It’s an easy thing to say from afar. The sort of madness that Russell can create disrupts even the most carefully laid plans, and most of the time captains shouldn’t be chastised for faltering. He is an agent of chaos. However, if you can avoid being drawn into this, the key is to keep your head, and look to overwhelm him with a simple strategy of bowling spin almost exclusively – leg-spin if you have it – then you’re giving yourself half a chance.