PROVIDENCE, Guyana – Hayley Matthews was at her all-round best with three wickets and 23 not out to Barbados to a big win over the Leeward Islands in the second match of Round 2 of the Cricket West Indies T20 Blaze tournament, on Thursday. The Leewards on the back foot from the first over at the Guyana National Stadium, as new balls bowler Shanika Bruce ran through the top order while Matthews cleaned up the lower half. Leewards managed to reach 60 all out in 18.2 overs, thanks to 18 extras.

Rosalie Dolabaille finished on 14 not out and Tiffany Thorpe with 10 off 12 balls were the only two Leewards batters to reach double figures. Bruce finished with figures of 4-2-15-3, while Matthews had 4-1-9-3. Kycia Knight’s stroke play of three boundaries took her to 12 off nine balls before she was caught going for another drive. Her twin Kyshona joined Matthews at the crease, and they knocked off the remaining 38 runs as the defending champs reached the target in 6.4 overs.

Jamaica maintained their unbeaten start to the tournament in low-scoring victory over the Windward Islands in the last match of the day under the lights. Playing in her first CWI T20 Blaze tournament, 18-year-old Jannillea Glasgow was brilliant with the new ball and grabbed 4-21 off 3.3 overs as Jamaica were bowled out for 91 within the allotted 20 overs.

Experience seamer Pearl Etienne was also excellent with 3-0-10-2. For the Jamaicans Rashada Williams (25) and Stafanie Taylor (18) shared in a 26-run partnership then Williams and Chadean Nation (10), shared in a 28-run stand.

The Windwards had a steady fall of wickets and never got the partnerships going. Skipper Afy Fletcher top-scored with 20 off 24 balls and Akeira Peters was the only other batter to reach double figures with 11 off 21. Jodi-Ann Morgan had the best bowling figures of 2.4-0-15-3, followed by Vanessa Watts with 3-1-5-2.

Taylor said: “We want to win, that’s the aim but if it’s not to be we want to put up a good fight and I can see that we are indeed hungry and giving it our all. It’s really good to see the young bowlers coming through, (last match) Gabbie [Neisha-Ann Waisome] got five wickets and tonight Morgan got three, so the young bowlers are chipping in and that’s a good sign for any captain.”

Rain played spoilsport in the first match of the day between hosts Guyana and Trinidad and Tobago, forcing the match to be abandoned without a ball being bowled. Despite toss taking place, not much else took play for the duration of allotted time, as the rains which had been around since Wednesday night continued and the covers remained on the square. As a result, the teams had to share two points each, which ironically were their first of the tournament since they both suffered losses in the opening round to Barbados and Jamaica, respectively.

Points table after Round 2 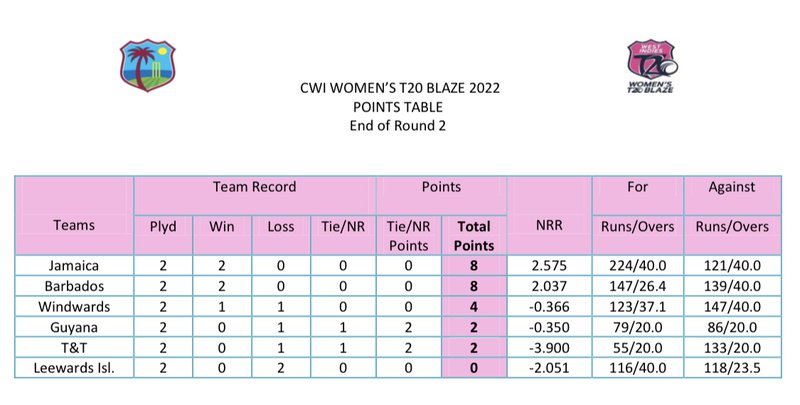