Fabian Allen smashed three sixes – including the winning shot over wide long-on which took West Indies to victory over Sri Lanka in the third and final CG Insurance T20 International on Sunday night. With the game on the line, he dispatched two maximums from Akila Dananjaya over the square leg boundary and then hit the third which secured victory in grand style. 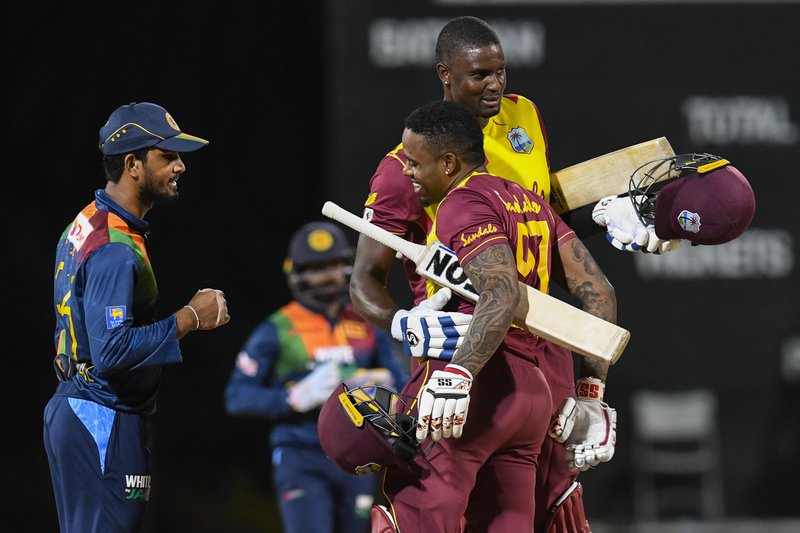 The all-rounder was the hero as the home side won another close encounter and took the three-match series 2-1. On hitting the winning runs Allen celebrated by screaming with delight, pumping his fists and looking towards the heavens. He was named the CG Insurance Man-of-the-Match.

“It feels really great to hit the winning runs for my team and get us over the line. It wasn’t just to win the match but to win the series so it’s quite a wonderful thing for me,” Allen said. “… I just backed myself in the end. It was a good performance overall.”

At one stage West Indies were 105-7 after 17 overs, needing 27 from the last 18 balls, but Allen made sure they would be no more hiccups. He ended unbeaten on 21 off just six balls and was well supported by Jason Holder who made 14 not out.

The over before his heroics from Lakshan Sandakan, the left-arm chinaman bowler, Holder farmed the strike so as not to expose Allen – a decision made by both batsmen. The move paid off.

Earlier, Dinesh Chandimal struck an unbeaten half-century but a disciplined effort from West Indies bowlers left the home side on top. He top-scored with an unbeaten 54 off 46 balls to steer the visitors to 131-4 off their 20 overs. Ashen Bandara struck an unbeaten 44 off 35 balls and together with Chandimal, put on a crucial 85 for the fifth wicket to rescue the innings from 46-4 in the 10th over.

This absolute blinder from the Player of the Match Fabian Allen was Spectacular!👏🏾 How good was this Mastercard Priceless Moment? #WIvSL #MenInMaroon #MastercardPricelessMoment pic.twitter.com/oMLQrYeUBd

Left-arm spinner Allen set the tone for the innings with the new ball when he had opener Danushka Gunathilaka magnificently caught and bowled, one-handed.