50% OFF WINDIES vs ENGLAND TICKETS UNTIL DECEMBER 24TH. CLICK HERE...

Cricket West Indies announced the launch of its “12 Days of Christmas” ticket promotion for the England Tour of the West Indies 2019, giving fans in each of the Series’ host countries the chance to buy up to a pair of tickets at half price.

“The England Tour of the West Indies is a cricket series that the whole region looks forward to,” said CWI Commercial Director, Dominic Warne.

“The excitement levels are building and so we want to give fans in the host countries a chance to buy an early Christmas present for a loved one or even themselves. We know it’s a time of year when people love giving presents, but also have to watch the dollars in their pockets.”

Warne added: “We’re delighted WINDIES legend, Sir Curtly Ambrose, joined us to help spread this Christmas message, since he knows the difference it will make if West Indies fans are there to get behind the team.

“It’s a chance for all fans to get their tickets early and at a great price, using the special promo codes provided.” 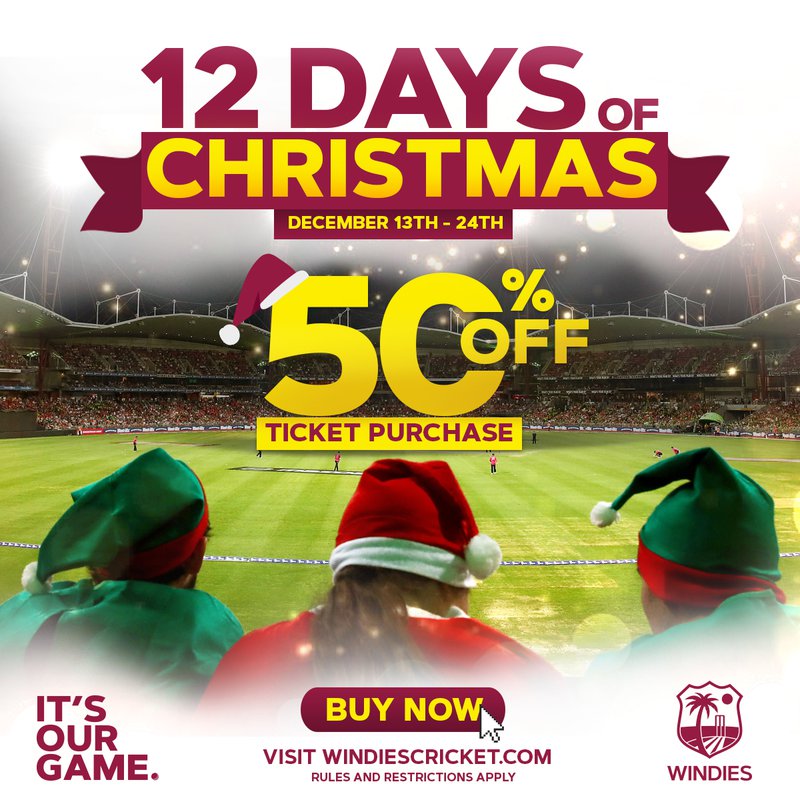 From today, December 13, until midnight Christmas Eve, December 24, and while stocks last, residents in the host territories for the Tour, i.e. Barbados, Antigua, St. Lucia, Grenada and St. Kitts, get 50 per cent off a pair of tickets for any ticket category, when they make their purchase through the www.windiescricket.com website using the “Buy Tickets” button.

Fans must use the specific promotional code for their country from the list below to activate the promotion. (See Terms & Conditions below)

The promo codes are:

Ticket booths will open approximately two weeks ahead of each game for fans to buy their tickets in person, albeit with tickets reverting to standard prices.

WINDIES are expected to name their Test squad following the third round of the ongoing West Indies Championship in January.

England announced last Monday that their Test squad remains the same following their recent Tour of Sri Lanka; Tom Curran and David Willey have been included, but Sam Curran, Liam Dawson and Olly Stone miss out on One-day International selection; and the Twenty20 International squad will be named at a later date.