CricViz's Patrick Noone compares the 1979 World Cup squad with their modern day counterparts.

When West Indies were last victorious in an ICC Cricket World Cup, their much-vaunted pace quartet of Michael Holding, Joel Garner, Andy Roberts and Colin Croft were at the peak of their powers. Roberts picked up seven wickets while the other three took eight each across the four matches West Indies played and, such was their dominance that West Indies’ squad did not feature a frontline spinner.

Viv Richards was the only man to bowl any overs of spin during the four matches (the group match against Sri Lanka was abandoned before a ball could be bowled) and, though his 3-52 was a crucial contribution to the semi-final win over Pakistan, his off-spin was very much a part-time option.

In 2019, seam bowling is once again West Indies’ stronger suit. Ashley Nurse is the only frontline spin option named in the 15-man squad and will add a great dynamic alongside Kemar Roach, Shannon Gabriel and the emerging talent of Oshane Thomas.

71.3% of the ODI wickets West Indies have taken since the last World Cup have been by seamers and that trend is likely to continue in England and Wales this summer. The current crop are a talented unit who will no doubt be effective in English conditions. 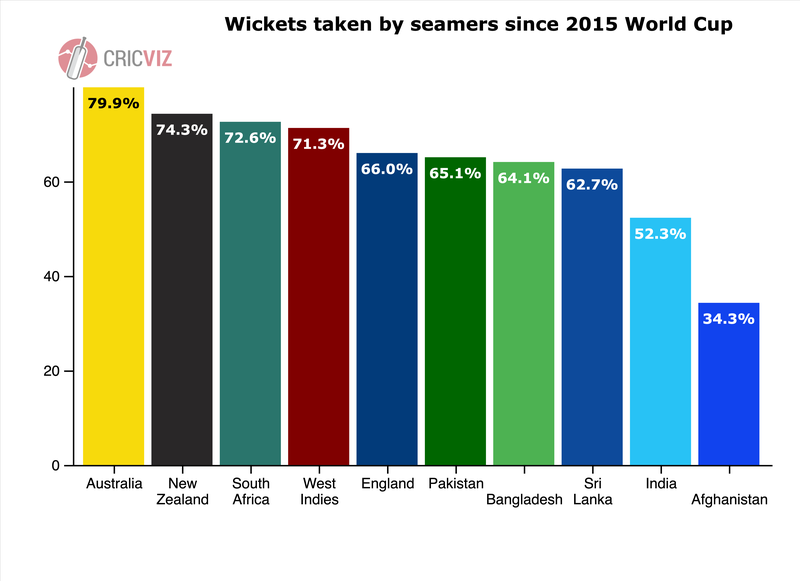 One feature of the current West Indies team that surpasses their predecessors is their hitting ability. The game has changed beyond recognition in the last forty years and with batsmen such as Chris Gayle and Andre Russell in their ranks, West Indies have always been ahead of the curve in terms of powerful batsmen.

Comparing the likely top six for the upcoming tournament with their 1979 counterparts makes for some interesting reading. Collis King and Viv Richards appear ahead of the curve in terms of strike rate, with each of them ahead of Gayle and Evin Lewis, despite the current opening pair being thought of as among the most aggressive in modern cricket. 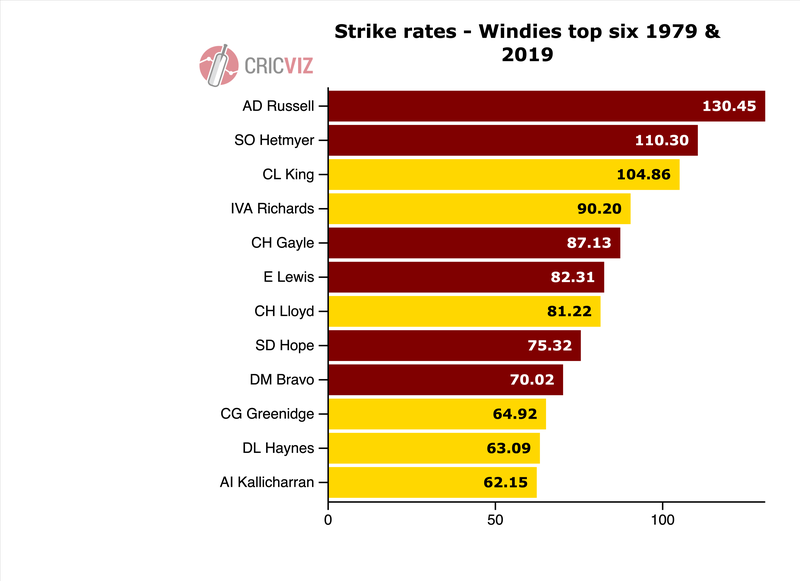 However, the relative positions of Gayle and Lewis on the graph compared to Gordon Greenidge and Desmond Haynes is revealing, with regard to the changing nature of ODI cricket. The 1979 pair were among the slowest scorers in the team, with the emphasis in those days on the openers laying a platform and keeping wickets in hand. With the change of fielding regulations – only two fielders outside the 30-yard circle for the first ten overs, for example – the focus for opening batsmen has shifted from a containment role to a more destructive one.

The phrase ‘laying a platform’ is still used, but nowadays it refers to the kind of platform that allows Shimron Hetmyer and Andre Russell come in and pummel bowling attacks at an astonishing rate. If West Indies’ batting clicks during the World Cup, another chapter in their rich history could be written, with no shortage of entertainment along the way.