Making her debut in the away series vs Pakistan in 2019, Karishma was impressive with her off-spin. She had figures of 2/20 in her debut T20 match and 0/17 in her debut ODI. Though she’s mainly an off-break bowler, she has the ability to bowl leg-spin and is known to bowl a couple in an over. This has made her a valuable asset to our team as batters have no clue which delivery she’s going to bowl.

Karishma has been on the fringes of West Indies cricket for a number of years, as she’s a member of the Trinidad and Tobago Women’s team, where she’s been outstanding in the regional tournament. Outside of the cricket field, Karishma is completing a Bachelor’s degree in Engineering from the University of Trinidad and Tobago with the aim of designing skyscrapers and future iconic architecture. 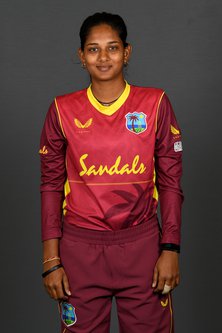